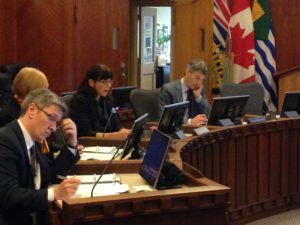 Oil spills, like other disasters such as floods or fires, are inherently local. Boaters, beachgoers or local emergency services are often among the first to discover a spill; and it is communities that are left with the consequences long after the response teams have gone home. But when it comes to marine oil spill planning and response in Canada, those who are most directly affected and have the most to lose – coastal residents and the local governments representing them – have ended up on the sidelines.

Oil spill planning and response should involve all levels of government, including municipalities and First Nations. It should be a transparent process that is ultimately accountable to local communities. But right now, the federal and provincial governments and industry are not adequately engaging with or supporting the involvement of local governments. In turn, some local governments, lacking capacity and understanding marine oil spills to be entirely a federal responsibility, are not adequately planning to manage the consequences of a marine spill on their community. Meanwhile, citizens are neglected altogether, with no official voice in planning or oversight, and with limited opportunities to play a part in protecting the places they love if a spill were to happen in their community. And industry has been granted far too much power in our polluter-pay system.

We know that all the preparation in the world won’t necessarily prevent devastating impacts in the event of a major oil spill, and we know that the best way to guard against a spill is to prevent further increases in tanker traffic. But the reality is that we already have 60 oil tankers (and thousands of other ships carrying large quantities of fuel oil) travelling through our waters each year.

We are working to improve transparency and accountability in spill planning and response, put the brakes on industry-led planning, and make sure that communities have a voice at all stages of the process – so we are all in the best possible position to protect citizens and the environment if the worst should happen.