Election night 2014 was a great moment for all those in BC who want to stop pipeline and tanker projects that threaten our coast and our climate.
From big city mayors to small town councillors, communities up and down the coast elected local leaders who promised to work in office to stop the Enbridge and Kinder Morgan pipelines. Vancouver, Burnaby, Victoria, Esquimalt, Prince Rupert and Smithers all elected mayors who are opposed to tar sands pipelines. 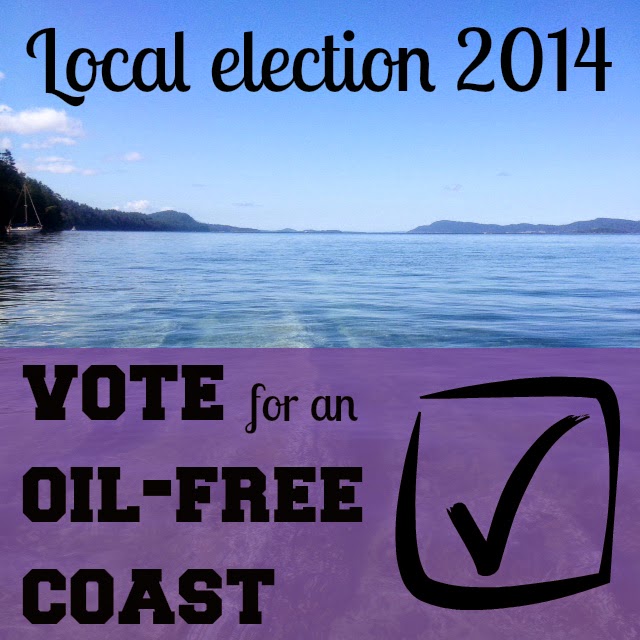 In the Vancouver Island community of Sooke, 70% of residents voted YES to a referendum question that commits the district to opposing the Kinder Morgan pipeline.
Across the province, fossil fuel projects and community control over environmental decision-making proved to be a defining issue in many local races. Although traditionally considered federal and provincial matters, this year’s municipal election campaign saw many candidates speaking out about the risks oil, coal and LNG transport could bring to their area, and demanding a greater say in the decision-making process. It was a telling sign of how concerned communities are about this issue, and how ignored they feel by other levels of government.
At Georgia Strait Alliance, we contributed to the debate by working in selected strategic locations around the Strait: Nanaimo, Parksville, Gibsons and the Sunshine Coast. We sent questionnaires to all registered candidates in these locations – 125 in total – asking their views on the Kinder Morgan pipeline as well as oil spill risk and response capacity. We circulated candidates’ replies to our supporters via email and published them on our website and social media, encouraging people to get informed, ask questions at all-candidates’ meetings and above all, get out and vote.
You can view a summary of the results here, in a set of score-cards by municipality that compare the responses of the candidates who replied. The vast majority of candidates who responded to our survey were opposed to the Kinder Morgan expansion project, did not feel their communities had adequate resources to prepare for an oil spill, and were concerned about the recent decision by the National Energy Board to overrule the City of Burnaby’s bylaws to allow Kinder Morgan to conduct surveying work on Burnaby Mountain. Most also said that if they were elected, they would work to ensure that residents’ views on Kinder Morgan are heard by the federal authorities who will ultimately decide the project’s outcome.
We were thrilled that when the votes were counted, many of these candidates were chosen to lead in their communities – particularly on the Sunshine Coast, where 65% of those who completed our survey were elected – and we look forward to working with municipalities around the Salish Sea in the coming months to ensure that community needs and voices are not ignored in this historic debate.

As the dramatic events unfolding on Burnaby Mountain over the past few days have brought into sharp focus, we need local leaders who are willing to stand up for their communities now more than ever. How many municipalities need to say ‘no’; how many First Nations need to launch lawsuits; how many ordinary citizens need to get arrested before the federal government and Kinder Morgan get the message that this pipeline will never be built? Whatever the NEB and Cabinet decide, it is abundantly clear that Kinder Morgan will never gain social license in BC – and that the future we want will have to be created by the local communities showing such great leadership today.