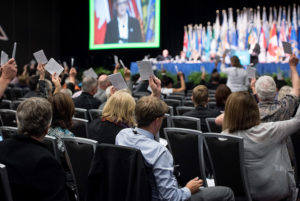 In a giant meeting room at the Union of BC Municipalities (UBCM) Convention, hundreds of our local elected representatives raised their hands and endorsed Resolution A4, calling for three key things:

This unanimous endorsement signals that communities are no longer prepared to be sidelined on an issue that affects them so directly. British Columbians expect the next federal government to provide communities with the tools and resources they need to be in the best possible position to protect public safety and the environment in the face of increasing shipments of oil and hazardous materials.

Now that the resolution has passed, the changes it calls for will be brought directly to provincial and federal decision makers by UBCM and local government champions – and we at GSA will continue to push hard to make sure that community oil spill preparedness is a top priority for all three levels of government. 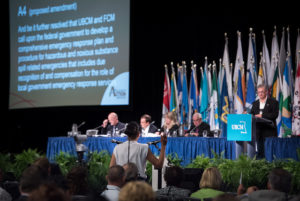 A round of applause is due to all the elected officials who stood up for the coast and their communities today, and especially to the City of Vancouver for championing this resolution with us from the beginning. And none of this would have been possible without so many of you taking the time to reach out to your local leaders, share our report online, and speak up for the places you love.

We know that all the preparation in the world won’t necessarily prevent devastating impacts in the event of a major oil spill, and we know that the best way to guard against a spill is to prevent further increases in tanker traffic. But the reality is that we already have 60 oil tankers, and thousands of other ships carrying large quantities of fuel oil, travelling through our waters each year, and we simply don’t have the plans in place that we need to deal with the current threat.

Today, we took an important step forward to change that for the better – and that’s something to celebrate!