Kinder Morgan, Prime Minister Trudeau is championing a proposal to expand the Trans Mountain pipeline that would result in a sixfold increase in tar sands tanker traffic in the Salish Sea. With a recent federal court ruling quashing federal approval of the Trans Mountain expansion, the project is in legal limbo. Read on to find out more about the project and why it’s not worth the risk. 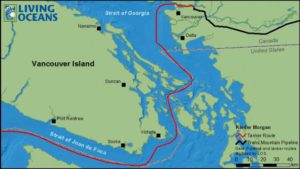 The Trans Mountain expansion project is a proposal to build a second pipeline alongside the existing pipeline route, running from Edmonton, Alberta, to Burnaby, BC. At the Westridge terminal in Burnaby, oil is transferred to Aframax class tankers, which are capable of carrying three times the amount of oil as was spilled by the Exxon Valdez. The tankers then travel through busy Second Narrows and Burrard Inlet, across the Georgia Strait, through the Gulf and San Juan Islands, around the southern tip of Vancouver Island, and out to the open ocean. 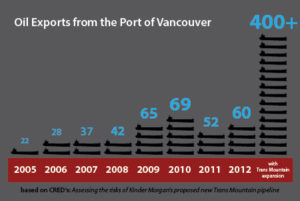 The expansion would result in an additional 590,000 barrels of tar sands oil traveling through the system each day, and a sixfold increase in annual tanker traffic in our fragile waters.

If approved, the project would also involve the construction of 14 new oil storage tanks on Burnaby Mountain, and a new dock complex at Westridge terminal capable of accommodating three Aframax tankers. 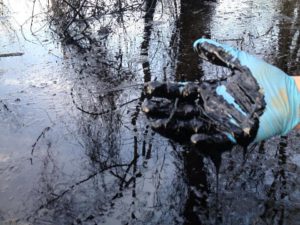 The expanded pipeline is expressly designed to carry diluted bitumen and other heavy oils from Alberta’s tar sands to serve foreign markets rather than domestic purposes.

Diluted bitumen (dilbit) is thick, tar-like bitumen blended with lighter conventional oil or condensate (a cocktail of natural gas) to allow it to flow through the pipeline.

If spilled and mixed with sediments in the ocean environment, dilbit is likely to sink below the ocean’s surface, which means that conventional oil recovery methods like booms and skimmers won’t work. Dilbit contains higher levels of heavy metals and other toxic substances than conventional crude, presenting additional potential risks to pipeline safety, human health, and the environment that are not yet fully understood.

Because it is so difficult to extract, producing one barrel of tar sands oil generates 3-4 times more carbon emissions than a barrel of conventional oil. This means that, even if it never spills oil, each tanker traveling through the Salish Sea guarantees a ‘carbon spill’ of 375,000 tonnes of climate-changing emissions when the oil it carries is burned and released into the atmosphere. Each year, the expanded Trans Mountain pipeline would be responsible for more carbon than the combined annual emissions of 90 nations around the world.

Building the Trans Mountain expansion would lock BC into a climate polluting path, away from climate leadership, and away from investment in alternative sources of energy and a comprehensive plan to transition to a low carbon economy.

A catastrophic oil spill in the Georgia Strait would devastate the marine environment, the coastal economy and BC’s green reputation for decades to come. Despite the fact that Trans Mountain is already shipping tar sands oil through our waters, we don’t have the resources to effectively respond to a conventional oil spill, let alone a diluted bitumen spill. Since even a ‘good’ response to a spill of conventional oil in our region would only recover about 10-20% of the oil, and since there are no known technologies to clean up a diluted bitumen spill, we need to stop spills before the oil hits the water. And the best way to do that is to prevent the additional risk that 400 extra tar sands tankers would bring, and say ‘no’ to Prime Minister Trudeau’s expansion plan.

According to expert evidence submitted to the NEB review panel in May 2015, a major oil spill along the Trans Mountain tanker route could:

“History has shown that the possibility of a spill originating from TransMountain’s facilities is very real. The potential for devastating effects on the environment, human health, and local economies is irrefutable.”

Click here to read more about oil spill impacts, how woefully under-prepared we are to deal with a spill on BC’s west coast, and GSA’s work to stop oil spills before they start.

We hear a lot about the economic benefits of the Trans Mountain pipeline, and how these benefits alone should cause us to overlook the catalogue of risks.

So what exactly are the benefits for BC? Pipeline supporters mainly points to 50 permanent BC jobs upon completion, as well as short-term construction jobs; and municipal and provincial tax revenues.

However, recent research has questioned the claimed economic benefits:

Sources: SFU/Goodman group and CRED BC

The economic benefits grow even more questionable when you compare the numbers to the jobs and revenue generated by tourism, outdoor recreation, sport fishing and other sectors that rely on a healthy Salish Sea, and could be put at risk by a major oil spill. Tourism in BC, for example, generates approximately $937 million annually in provincial tax revenue and provides 131,000 full time equivalent jobs.

Over the longer term, continuing to over-rely on the fossil fuel industry instead of investing in low carbon alternatives could threaten Canada’s economy in a number of ways. Oil prices could stay low, making the expensive tar sands extraction process unviable. Carbon pricing could become more widespread, and carbon-intensive products could become more expensive and subject to trade restrictions. Canada could lose out on competing internationally in the clean energy economy of tomorrow, and could scramble to replace and pay for the jobs and services fossil fuels currently provide. 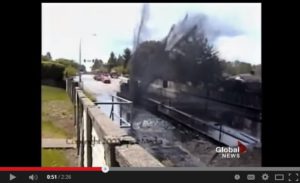 Texas-based Kinder Morgan bought the Trans Mountain pipeline in 2005. The pipeline was originally built in 1953 to meet the Vancouver area’s domestic energy needs. Since Kinder Morgan took over, there have been four major oil spills on the line, including the 2007 rupture that resulted in a 30-metre geyser of oil forcing the evacuation of 50 homes in a Burnaby neighbourhood, and 250,000 litres of crude oil ending up in Burrard Inlet.

In the wake of strong public opposition to the project, persistent issues with permitting and regulations, and escalating legal risks that culminated in the quashing of the pipeline approval, Kinder Morgan sold the Trans Mountain pipeline to the government of Canada, making Prime Minister Trudeau the champion for this threat to the Salish Sea. Final approval of the sale by Kinder Morgan shareholders happened hours after the federal court quashed the Trans Mountain approval,

In August 2018, the federal court quashed the federal approval of the Trans Mountain expansion. The court ruled that the National Energy Board’s consideration of the impacts of tanker traffic on Southern Resident Killer Whales was too flawed to be relied on, and that consultation with First Nations did not meet the standards set out in previous court cases.

What you can do to stop the Trans Mountain pipeline