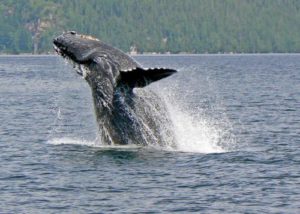 The biggest thrill of boating is the amazing wildlife that we encounter in and around the Salish Sea. However, as boaters we must be mindful that our watercraft can cause:

These orcas are an endangered species. In May 2022, the population numbers 75 individuals – a number that includes two new calves that have been born in the last few months. 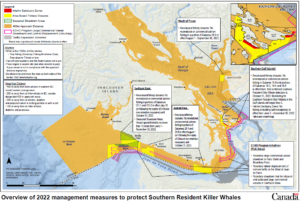 It is the law to keep 400 metres away from all orcas (with some exceptions) in southern BC coastal waters from Campbell River to Ucluelet (the orange areas on the map), year-round in effect until May 31, 2023.

It is also mandatory to be 200 metres away from all orcas in all other areas of Canadian Pacific waters all year-round.

There are also area-based fishery closures with various effective dates; always be aware of current fishing regulations when harvesting seafood.

The Government of Canada’s “Overview of 2022 management measures to protect Southern Resident Killer Whales” can be download and includes a map of all the areas and interim sanctuary zones that are referred to on this page. Additional information, including maps of interim sanctuary zones, seasonal slow down areas, area-based fishery closures, and more can be found on the Government of Canada website.

You can also take the pledge to Give Them Space, and go beyond the legal requirements to protect Southern Resident Killer Whales!

There has been a resurgence in the number of humpback whales in the coastal waters around British Columbia and Washington – and these whales are very large. Their size and unpredictability increase the risk of collision and injury to whales and to boaters. When you suspect you are in the vicinity of large whales:

If you experience or witness a collision, entanglement or disturbance: