Large predators often get a bad rap in terms of public outlook and opinion. Large predators in both marine and terrestrial environments has often been one of fear, misunderstanding, and misinformation. It was not until recently that public opinion on orcas began to change from one of a negative monstrous creatures to one of intelligent and social animals. Many people still fear apex predators, which are the highest carnivorous species in a food chain such as lions, sharks, orcas, or wolves. Apex predators are often targeted for unnecessary culls, relocations, and removals without consideration of the impacts this has for the lower end of the food chain. Bioaccumulation – that is, the accumulation of chemicals up a food chain – of heavy metals, harmful pollutants, and microplastics within our oceans is amplified within top predators, like orcas. This can lead to a secondary loss of apex predators from the top of the environment due to illness and mortality that can result from toxic contamination, which is often rooted in human activities. 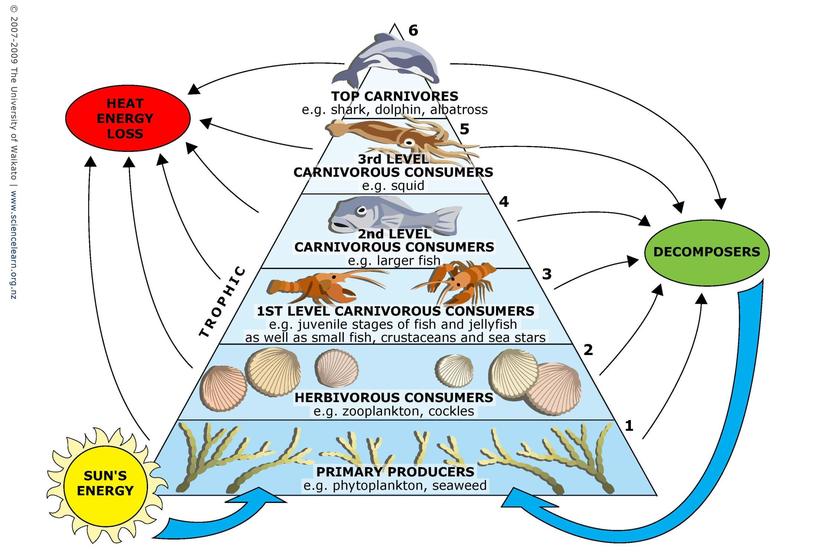 The dynamics of apex predators is complicated. Did you know that the complexities of our kelp forests, recreational fishing successes, and beauty of our coastlines is deeply connected with the health of individual apex predators like orcas? Each group is directly related to one another.

Predators play an immense role in terms of top-down control, removing individual prey including sick prey, from populations, creating opportunities for more species to compete, and controlling trophic cascades, which can change the environment itself. Trophic cascades are a Domino-style effect, where one change leads to a series or cascade of changes in the environment. This diagram shows how the removal of an apex predator, like the wolf, has negative consequences down the food chain leading to an over-population of browsers like elk, who deplete primary sources of food like plants, shrubs and grasses.

Mesopredators- Stuck in the middle!

Within both temperate and tropical oceans, the presence of apex predators plays an important role in controlling secondary predator populations. A secondary predator, or mesopredator (meaning mid-ranking), is a species which preys upon lower trophic level organisms. Predators such as various Pacific salmon species and Pacific cod are important sources of food, transferring nutrients and energy from lower trophic level species, like small fish and krill, to high apex predators like orcas. Chinook salmon, which predate heavily on oil-rich fish such as eulachon and herring, are highly valuable to Southern Resident orcas who eat them. Negative effects within mesopredator populations can occur once apex predators are removed from the delicate equation. Mesopredator populations are controlled by apex predators who keep them in check and prevent them from eating too many individuals lower in the food chain, like herbivores. When an apex predator species is removed, that directly controls mesopredators populations, herbivore populations often become over-hunted as meso-populations explode in the newly available space.

The danger of losing an apex predator, within any environment, comes from mesopredators behaviours being unpredictable once the pressure from apex predators is removed. This can change things from nitrogen deposition in oceans to increasing clogging of waterways by algae, to decreasing seabird populations feeding on low trophic level animals. For example, corals are more likely to bleach and be blocked from sunlight due to algae growth when sharks are removed, due to mesopredators eating the cleaner fish entirely out of reefs. Lakes can become dead zones when mesopredators are not controlled by apex predators. They devour the algae-eating smaller fishes that control toxic algal blooms. Removal of jaguars increases deer populations which impact forests by over-browsing. Removal of wolves increases elk populations, which reduce foraging cover for birds and smaller animals.

So how does this play out close to home? With the recent announcement from the federal government that the endangered Southern Resident killer whales are at imminent threat of survival and recovery, decisions need to be made on best options to protect the 76 remaining individuals, now and into the future. The ecological impacts of whales should they go extinct, needs to be evaluated. Within Alaska, however, there have been studies of mammal-eating orcas akin to transient orcas found in the Georgia Strait. Downward trends in seal and sea lion populations in Alaska have been noted, with the main explanation likely due to decreasing fish stocks in the north. With decreasing mesopredators like the sea lions, the top predators, orcas, are turning towards unlikely prey. The orcas in Alaska have been observed predating on sea otter populations, and dramatically reducing them as the orcas attempt to adjust to the changing food availability in their region. Sea otters are keystone species, meaning they have an effect on the environment that is far greater than expected compared to their biomass. Sea otters control urchin populations, which if left unchecked, devastate coastal kelp forests. When orcas are left to starve, they indirectly create a vicious cycle of coastal instability, which can all be traced back to extreme harvesting within Alaskan fisheries.

Currently, Chinook salmon populations are largely impacted from unsustainable fisheries, open net-pen fish farming activities, polluted waters both in the ocean and spawning waterways, loss of habitat in their home streams, and the negative effects of climate change. Southern Resident killer whales depend on Chinook and have been heavily impacted by the depletion of their main food source, suffering from malnutrition and starvation. The federal government has announced a reduction of 25-35% in catch limits of Chinook along the coast of BC as well as some fishing area closures within the Strait of Juan de Fuca, the Gulf Islands, and portions of the Fraser River estuary. These measures alone will not be enough to bring back healthy Chinook populations and therefore the Southern Residents. Fisheries management needs to ensure that enough Chinook salmon are reaching the spawning grounds in order to rebuild the population. Habitat restoration of Chinook spawning grounds and migration corridors is essential to their survival and stock recovery. Chinook also need clean, healthy waters to live in, free of toxic contamination. A starving – and eventually disappearing killer whale population may negatively impact our coastline in ways we may not be able to predict. This is a tragedy, as it is human-caused threats that have pushed Southern Residents to the brink of extinction.

There are many examples of how impacting apex predators through their prey has often created long-lasting, negative effects. To aid in further action, we need to consider how our coast will change with the potential extirpation of our most iconic apex predator and how that could alter the entire food chain from the top down. Losing our killer whales is a potential environmental slippery slope and would be an immense cultural loss to our coastal communities. As threats to the orcas increase while the federal government continues to stall in taking immediate action to address these threats, our Southern Residents slide further towards extinction, and only then will we realize just how deep of a role our orcas play in the functioning of our coastal ecosystems.

3 thoughts on “Apex Predators and a Healthy Planet”