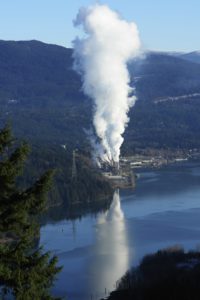 Pulp mills still circle the Straits of Georgia and Juan de Fuca and although new technology in recent years has decreased the impacts of these mills on the environment,  they continue to cause harm to our air, water and soil:

Despite these low standards, pulp mills in BC routinely exceed their Ministry of Environment pollution permits – with little or no consequence.

Air pollution from pulp mills can cause a wide range of health problems as well as environmental impacts.

Pulp mills are BC’s largest single source of airborne dioxins, which are known carcinogenic substances that persist in the environment and in the bodies of animals (including humans). Particulate matter from pulp mills are also toxic, and mills create pollution that leads to smog and global warming. These are only a few of the known impacts.

Sludge is the solid waste left over from wastewater treatment plants.  It is a complex and changeable mixture of dozens or even hundreds of compounds, just like mill wastewater. Some are well known, like heavy metals, dioxin and other organochlorines. Some, created by the bacteria in the treatment ponds, are probably unknown to science.

Pulp mills are running out of landfill space and want to spread sludge on our forests, parks and farms. While it might seem sensible to “re-use” the nutrients in this waste product, sludge still contains many toxic chemicals whose impacts on the environment and our health are not fully known.

The key concern about spreading sludge on land is that we simply don’t know what is in the sludge, how those chemicals will interact and what impact they could have on the environment.  That concern was not helped when in 2005, the province reduced the number of compounds required for testing from 50 to 11, reducing our understanding even more.

Until we have more comprehensive testing of what’s in the sludge, no spreading of it can be considered safe.

Pulp and paper production doesn’t have to degrade the environment, air quality or human and wildlife health.

If we reduce the use of chlorinated bleaching chemicals in the pulp and paper manufacturing process, we can:

New technologies exist for achieving these goals. However, not enough mills in North America do not use these clean technologies.

A loud consumer demand for products created without using chlorine compounds has started but it needs to continue. The production of pulp and paper does not have to mean inevitable damage to the environment.

When buying paper products, choose those that are either unbleached, or bleached without chlorine compounds.

Look for these labels to be sure you’re buying products that are truly chlorine free:

Watch out for “elemental chlorine free”: this is NOT made without chlorine compounds – it’s simply bleached with chlorine dioxide instead of chlorine gas. It’s still harmful to the environment and our health.