By burning fossil fuels, we are changing the chemistry of the ocean – making it deadly for many of the creatures that live in it.

Up to a third of all the CO2 we release into the atmosphere is absorbed by the ocean. As it dissolves, it produces carbonic acid, which makes seawater acidic. The more greenhouse gases we produce, the more acidic the oceans will become.

Ocean acidity is rising dangerously fast. Since the beginning of the industrial age (just 250 years ago), it has increased by about 30% worldwide. It is now rising faster than any time in the past 55 million years – much faster than we can expect plants or animals to adapt. 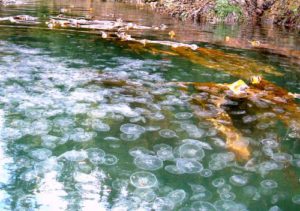 In an acidic ocean, certain animals will thrive: for example, jellyfish, some seaweeds, and the disease-causing Vibrio bacteria.

But survival will be much, much harder for animals with shells (which includes coral reefs, home to 25% of the world’s marine species).

As acidity increases, animals with shells will grow more slowly and their shells will be weakened. Once the acidity level is high, seawater will dissolve the shells of living animals.

Scientists say that if we continue producing CO2 at our current rate, the ocean’s acidity will more than double – some say it will triple – by the end of this century. Seawater this corrosive will cause immense damage to marine life.

The problem is worst at high latitudes, because cold water can dissolve more CO2 than warm water. Research shows that that 10% of seawater around the north pole is likely to be corrosive to marine life by 2018 – rising to 100% by 2100.

As a result, we could see the extinction of some marine species by 2050. Even many species without shells will be threatened. The impacts will be felt worldwide, all the way from the tiniest plankton to the great whales.

Here in the Strait 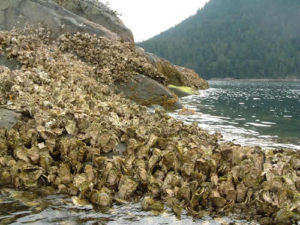 Ocean acidification threatens many species in the Strait of Georgia – even creatures without shells. Among the victims: 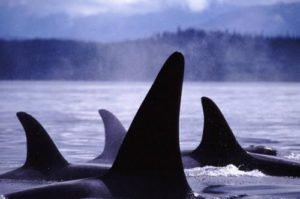 Even killer whales will feel the impact. Photo by Alexandra Morton

The effects will ripple up the entire marine food chain. The loss of pteropods will mean fewer Chinook salmon – the main food of killer whales. Acidification may also change the way sounds are absorbed in the ocean – making it hard for whales and dolphins to navigate and find prey.

Ocean acidification may already be having some serious impacts close to home. For example, in Washington State:

The economic impacts of ocean acidification are already being felt in our region. In 2014, we learned that rising acidity levels in Qualicum Bay were most likely to blame for the collapse of local scallop stocks, which cost Island Scallops $10 million and forced the company to lay off a third of its workforce.

More than 15,000 British Columbians work in commercial fishing, sport fishing or shellfish aquaculture. Together, they produce close to $500 million/year for BC’s economy. These industries rely on a healthy, productive ocean – which is threatened by our continuing use of fossil fuels.

Scientists have been studying ocean acidification for only a short time, so it’s too early to be certain of all of its consequences. Studies suggest that species will react in different ways – some might grow faster, while others struggle or die.

But we can be sure of one thing: the marine ecosystem will be fundamentally changed if we keep producing CO2 emissions at our current rate.

Ocean acidification can be stopped, but only if we dramatically reduce our use of fossil fuels – quickly.