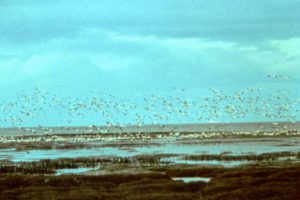 In July 2007 the National Wildlife Federation (NWF) published a study, Sea-Level Rise and Coastal Habitats in the Pacific Northwest. The authors looked at 11 specific sites within the region, using computer modelling to identify the impacts of sea level rise projections from the IPCC and more recent studies. Overall, they concluded that “the region is likely to face a dramatic shift in the extent and diversity of its coastal marshes, swamps, beaches and other habitats due to sea-level rise.”

For example, using the IPCC’s projection of 0.69 meters (27.3 inches) of global sea level rise in this century, the NWF study predicts, by 2100:

Coastal habitats such as beaches, marshes, tidal flats and estuaries are vital to wildlife.

Millions of birds – from 29 countries and three continents – rely on the Fraser estuary and mudﬂats of Roberts Bank and Boundary Bay, to feed and rest as they migrate along the Paciﬁc Flyway each year.

For over 80% of BC’s wildlife – including wild salmon as well as birds – estuaries are essential during some part of the life cycle.

Such coastal habitat loss could tip the balance for threatened and endangered species. It would mean, for example:

These changes would also have massive impacts on the economy of our region, hitting especially hard at BC’s tourism industry, shellfish aquaculture and fisheries.

Many of our Strait of Georgia communities and sensitive estuaries face flooding by rising seawater. Salmon runs will perish as they encounter the warming waters of the Fraser River and countless other streams. The cumulative impacts across the many watersheds that drain into our inland sea will change the Strait in ways no one can foresee.

Complicating the issue, many of our coastal areas have already been developed, polluted, dredged or otherwise damaged. Dikes, seawalls and other structures have reduced the possibility for critical habitats to simply move inland to adapt to sea level rise – so we cannot afford any further losses in terms of coastal habitat.