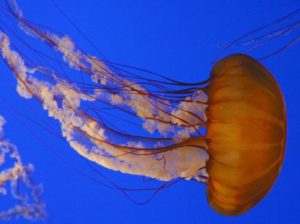 Impacts for species in the Strait of Georgia

An ocean of poison – B.C.’s majestic killer whales are dying as their ocean home surrenders to the stress of pollution, global warming and carbonic acid (MacLeans, August 6, 2009)

Ocean acidification may already be having some serious impacts close to home.

Studies suggest that species will react in different ways – some might grow faster, while others struggle or die.