Brace yourselves. After three long years, the National Energy Board will issue its recommendation on the Kinder Morgan pipeline later this week. Since the regulator has rubber stamped every oil pipeline it has ever assessed, the NEB is widely expected to recommend a ‘yes’ on Kinder Morgan, with a laundry list of conditions attached.

Before we all get depressed, remember that the NEB doesn’t call the shots – it’s Cabinet that makes the final decision on Kinder Morgan. The NEB report is just one more chance for us to repeat the Prime Minister’s own words back to him: “While governments may grant permits, only communities can grant permission.” And BC does not give permission for the Kinder Morgan pipeline.

The review process leading up to this week’s recommendation has lost all credibility, as has the NEB itself. The federal government acknowledged this back in January when it announced an additional round of consultation on Kinder Morgan to inform its ultimate decision in December. The credibility crisis also appears to be behind the selection of the three-member Ministerial panel announced today to consult with communities and Indigenous groups along the pipeline and tanker route.

The Ministerial panel members come from diverse backgrounds, unlike the members of the previous NEB panel who all had deep ties to the oil and energy sector. Like their predecessors, however, the new panel faces an impossible task – gaining social license for Kinder Morgan – and will hear the same answer – a resounding NO from First Nations, municipalities and the public.

You can check out some of these voices in a new interactive map from our friends at the Wilderness Committee, which shows major concerns from 12 municipalities and 38 First Nations along the proposed pipeline and tanker route.  The map is part of a brand-new hub website we have launched with the growing network of groups working together to stop the Kinder Morgan pipeline, to keep you up to speed with all the latest action in the campaign.

So what’s next? It’s time to organize!

The panel will hold holding open public meetings along the pipeline and tanker route from June till October, and we need you to be there! This is our last, best chance to tell the government why the Kinder Morgan pipeline is the wrong choice for our region. We are coordinating with our allies to make sure every public meeting is filled to the rafters, and the online comments are flooded with concerned residents speaking up for the coast, climate and communities.

One of the biggest failings of the previous NEB process was the decision to exclude thousands of people like you from having your say about Kinder Morgan.  Please take a moment now and pledge to make your voice heard. We’ll keep you in the loop as public meetings are announced, and make sure you have all the information you need to take part. 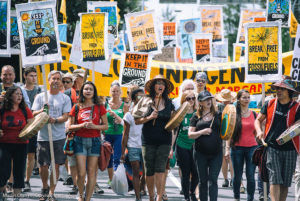 It’s crunch time in this long fight, and if you’ve been following along from the sidelines, now is the time to dive in – because make no mistake, we have our work cut out for us to stop this pipeline. The Prime Minister is under huge pressure from the oil industry and the Alberta government to get a pipeline built to the coast. We’ve heard repeated statements from Ottawa about the need to get Canadian resources to market. Officially, the BC government does not support the Kinder Morgan project in its current form, but talks optimistically about ‘getting to yes.’  This is a high stakes political chess game – and it’s our job to show that we will not allow the BC coast to become a pawn to be sacrificed to the pipeline pushers.

We have come too far together to stop now. Join us this summer, and let’s make enough noise to ensure that the Prime Minister has no choice but to send Kinder Morgan packing.