This week the federal government announced an extension to its review of the Kinder Morgan project, which we have all been calling for since the election. 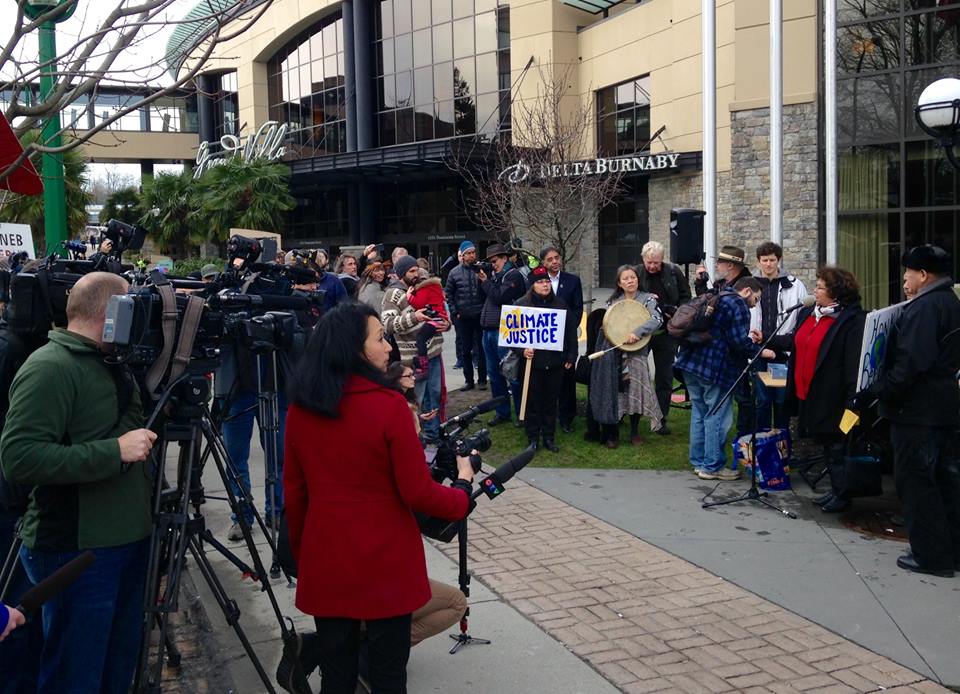 Outside the NEB’s Kinder Morgan hearings in Burnaby, January 2016

The extra steps imposed will include assessing direct and upstream greenhouse gas emissions from the proposed pipeline expansion, talking to affected communities, and carrying out additional consultation with First Nations. The timeline has also been extended again, and the Cabinet decision is not expected now until December 2016.

These are part of five principles that will guide government decision-making on dozens of projects already under review, while a longer-term overhaul of the environmental assessment process takes place.

This is a big step forward, and at least a partial victory for all of us who have been calling out the major flaws in the existing pipeline review process. It means the new government is listening, and feeling the pressure. Longer term, it means we have an opportunity to shape an entirely new environmental assessment process for future projects, seen through the lens of potential climate impacts.  A true climate test, which would have been unimaginable a year ago, changes the conversation around energy development in Canada, and could help to address the fossil fuel project ‘whack-a-mole’ problem we currently face. This is progress, and should be celebrated.

The climate test will only consider oil production and transport, and not the emissions that result when the oil is eventually burned, which accounts for most of the climate impact (up to 89% of total emissions). If we simply export the climate impacts elsewhere, Canada is not honouring its newly-minted commitment to limit warming globally to 1.5 degrees. A true climate test would assess a project’s upstream and downstream emissions, and measure it against the 1.5 degree commitment – which any tar sands pipeline would surely fail. As David Suzuki put it, “After Paris, why are we still talking pipelines?”

On consultation with affected communities and First Nations, the details provided in the announcement were slim, and leave plenty of questions. Will the government hear from all members of the public who care about the outcome of this pipeline project? (Sign up here to be notified when the new process is announced). Will an extra four months really allow for meaningful consultation with First Nations? And what of the government’s commitment to uphold the UN Declaration on the Rights of Indigenous Peoples, and the Tsilhqot’in legal precedent, both of which affirm the need for consent and not just consultation?

Perhaps most concerning, both ministers said that the new measures were intended to restore public confidence in the review process so that projects could get done, and resources could get to market. The NEB’s review of Kinder Morgan has foundered on the perception that its decision was a foregone conclusion, and it is disappointing to hear a similar tone in this week’s announcement.

Let’s be clear: none of these new measures change the fundamentals about this project and why it must be rejected. These measures won’t clean-up sunken diluted bitumen, or protect endangered killer whales, or prevent untold damage to the coast and the economy from a massive oil spill. These measures won’t change the fact that First Nations, municipalities, the public and the Province of BC make up a formidable line-up of opponents to Kinder Morgan.

And here’s more good news: people power brought about these new, albeit inadequate measures, and people power can continue to influence the roll-out of the next stages of the Kinder Morgan review. The extra assessment – and the final decision – will be carried out not by the NEB, whose job will soon be over, but by the new government that Canadians just elected. This week’s announcement proved that the government is listening. So we should take a moment to celebrate this step forward, and then put our boots on again for the next stage of the fight to stop Kinder Morgan.

p to be the first to know when the government releases more information about the new round of public consultation.

2 thoughts on “Pipeline review overhaul: what does it mean for Kinder Morgan?”