“There’s been an oil spill in English Bay.”

I woke up last Thursday morning to the words so many of us hoped we would never hear. My mind instantly ran to images of crews scrubbing rocks after the Exxon Valdez as I feared the worst. Then came temporary relief:  the spill had been dubbed ‘minor’, and the source was a grain ship, not an oil tanker. 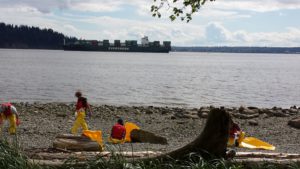 But later that day aerial photos of an oil sheen coating Burrard Inlet emerged, as did the first signs that the response to the spill was unacceptably poor. By Friday, the political shift-the-blame-game was in full swing, public health warnings were being posted on our beautiful beaches, and reports of oiled birds were coming in. And on Saturday, I found myself rounding a corner of the Stanley Park seawall to come face to face with clean-up crews in hazmat gear that were straight out of those old Exxon Valdez photos.

The situation is still evolving, and claims and counter-claims are still being made as the many overlapping agencies involved in the spill response – and those of us keeping a close watch on it – dissect the spill and its aftermath. But here is what we know so far (info below is from the City of Vancouver unless otherwise noted):

Like many of you, I find myself struggling to imagine how this could have happened here, in our greenest city on earth, and in calm spring weather.

We’ve been told over and over that we have ‘world class’ spill response in place, and last week the truth came out (despite the federal government’s transparent PR campaign to paint the spill response as effective and timely) : we’re not ready – not even for a comparatively small spill.

This incident illustrates what GSA has been telling decision-makers for years: communities need stronger spill response to deal with the threat of oil spills we already face, and we need to minimize future risks by saying no to projects like Kinder Morgan’s pipeline expansion that would dramatically increase tanker traffic in our waters.

Despite the spill taking place in the most well-resourced urban area on our coast, the oil slick spread for 6 hours before booms were in place. If this accident had happened in a more remote part of the Georgia Strait, how long would it take for response crews to arrive? How would local authorities cope in the meantime?

Right now, GSA is working with a team of experts to assess the adequacy of local government spill response capability, identify additional training and resources that could be put in place to help municipalities be better prepared, and have a stronger voice in planning for and responding to a spill. We saw last week how the community’s role in the response to a spill was hand-cuffed by the 12-hour delay in notifying the City of Vancouver of the incident.

We will be presenting this report to the National Energy Board’s review of Kinder Morgan’s application to expand its Trans Mountain pipeline, where we have intervenor status. We will also be taking these lessons learned to communities around the region, to get this critical information into the hands of local governments and the people they serve so they can stand up for the health of their communities. Stay tuned for the report launch in May! 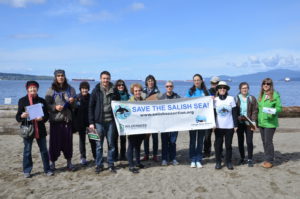 Last Saturday, I spent the day in English Bay with colleagues and volunteers, bearing witness to the spill and its aftermath, and gathering petition signatures asking Premier Clark to take back the province’s power to say ‘no’ to risky projects like Kinder Morgan. It was inspiring to stand together with so many people who simply turned up, wanting to help in some way, and work together to ensure that this can never happen again.

Since the spill, we have been asked by many people what they can do to help – so here are a few suggestions:

And please make a donation to GSA to ensure that we can continue advocating for stronger spill response, and raising your voices in opposition to the unacceptable and exponential risks posed by Kinder Morgan’s pipeline proposal.

Vancouver had a wake-up call last week – let’s make sure this can never happen again.

2 thoughts on “The wake-up call we needed”