This is Jody’s Story… 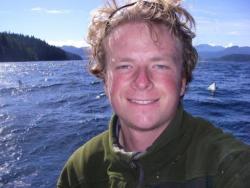 It’s not often you meet someone like Jody Eriksson. Jody calls remote Okisollo Channel his home and has lived in the Discovery Islands his whole life. He drives a boat instead of a car, and has learned pretty much everything he knows from the environment around him.
Ask Jody anything about salmon that migrate through his area and he’ll tell you…more than you expect to hear. The majority of juvenile salmon from southern Vancouver Island and the Fraser River pour through the northern Georgia Strait on their way to the open ocean, many of them passing right by Jody’s front door. He has observed juvenile salmon migrating north all his life, starting in early spring with the first little pink and chum emerging from local creeks and mainland rivers, followed by juveniles from further south including Fraser River Sockeye.
For the past several years in the spring, Jody has been part of the team sampling those same wild juvenile salmon for research on the impacts of sea lice from fish farms. Jody was the one who beach seined the Fraser River sockeye that did not return this year….he should know –before the DNA results were in, he knew they were Fraser River sockeye, and before they returned to spawn he saw many of them wouldn’t make it back to the Fraser.
In 2007, Jody sampled the juvenile sockeye that would have been part of this year’s return, and found them heavily infected with sea lice. Some of the small fish were infected with as many as 30 sea lice near the farms. When asked about the fact that many of the sea lice found on the sockeye sampled were a non-salmon specific generalist species called Caligus, he replied “Both types of sea lice are found on juvenile salmon migrating past the fish farms, and both types are found on the farmed salmon. Yes, sea lice are natural, but the fish farms break the natural cycle by putting parasite hosting adult salmon right on the migration paths of juvenile salmon when they would otherwise naturally encounter few sea lice. As a result, there are way more sea lice of both kinds on juvenile salmon near the farms than there are before the fish reach the farms.”
Open net cage supporters point to the great returns of many pink salmon runs this year as evidence that it couldn’t have been the fish farms that caused this year’s Fraser River sockeye to collapse. “Nothing could be further from the truth”, he says. “In fact you can quote me…the Fraser River Sockeye will almost certainly have a good year next year. Lice levels were down when they went out to sea, and ocean conditions were good for them. They should return in strong numbers just like this year’s incredible return of pinks that they migrated out with.” Why were these wild juvenile salmon less infected with sea lice then? Many things affect lice levels, such as salinity, timing of sea lice treatment, and stocking status of the farms, like whether they are empty, contain younger fish, or lice-ridden adult fish. “I have no doubt that more wild salmon would be returning if the fish farms weren’t there, even in years with strong returns. More farmed salmon in the water means more sea lice means more juvenile wild salmon die.”
He’s also quick to point out that the drug fish farmers use to try and control their sea lice problems affects crustaceans. “Sea lice are crustaceans and so are prawns, crab and shrimp. Prawn traps come up empty near the farms after they treat with SLICE.”
Does Jody think it’s a good idea to clear Okisollo and Hoskyn Channels of fish farms in order to protect wild salmon? “We need to get rid of all the open net-cage fish farms, but here is as good a place to start as any, being the first farms that the Fraser River salmon migrate past. Next to go would be Nodales…the juvenile salmon spend lots of time feeding and growing there, and those farms have to treat twice a year because their sea lice are so bad. The water just sloshes back and forth and there are 4 farms in Nodales. Then keep going north…”
Watch Jody in action as he samples juvenile salmon in Lice Infection on Fraser River Sockeye by filmmaker Twyla Roscovich.