With federal and provincial permits in hand, the Kinder Morgan pipeline is a done deal, right?

Wrong. The front-line of the battle to defend our coast from Kinder Morgan has shifted, and we face challenges on our path to victory – but so does Kinder Morgan.

Here’s how Kinder Morgan can and will be stopped – and what you can do now. 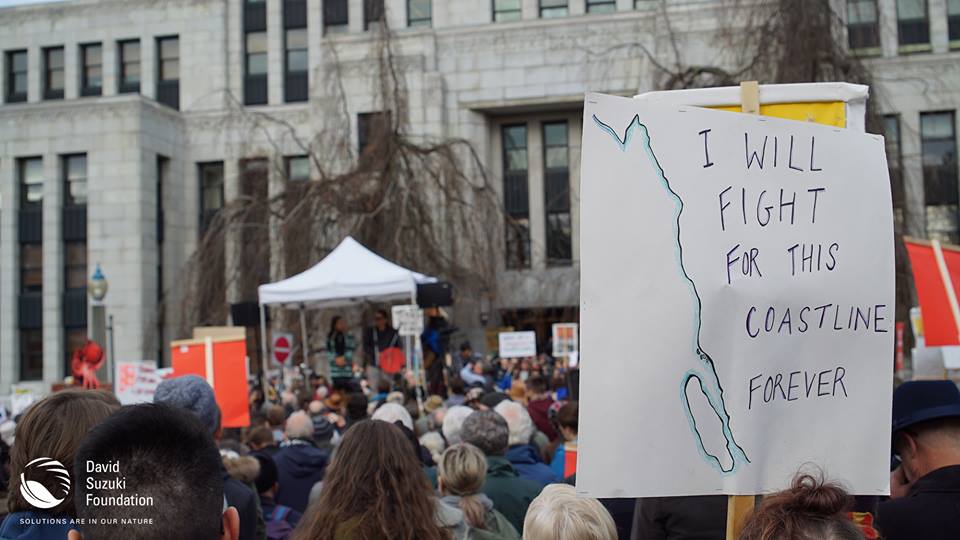 Killed by the courts

The Enbridge pipeline was ultimately sunk by the courts, against the backdrop of determined citizen and First Nations resistance – and Kinder Morgan can be as well.

Nine lawsuits have been filed by First Nations, municipalities and environmental groups against the federal approval, challenging the government’s failure to consult and accommodate constitutionally protected Aboriginal rights, uphold the species at risk act, and provide due process in the broken NEB review.

If the courts uphold any of these legal challenges, further consultation could be required, or permits could ultimately be overturned.  Even if they don’t, the legal wrangling could easily cause delays and increased costs for Kinder Morgan.

BC votes, and the provincial government steps up

When British Columbians head to the polls this May, they face a stark choice between the major parties. The BC Liberals have given Kinder Morgan their blessing, while the NDP and the Green Party are firmly opposed.

A provincial government committed to stopping Kinder Morgan has options to protect BC: it can refuse to issue provincial permits required for construction, and it can pass new laws to block the project. Taking such steps would require political courage, in the face of possible legal backlash from Kinder Morgan and/or the federal government – but it is not without precedent, and it is the kind of leadership BC needs now.

People power for the win

Kinder Morgan has been called BC’s Standing Rock. This is about more than protecting our home from oil spills; it’s an iconic struggle over the path ahead – for Canada and the world.  This is about being part of the generation of Canadians who fights to understand and embrace true reconciliation; and who stands up to the powerful oil industry and has the courage to say, your time is over.

Determined citizens joining powerful Indigenous-led resistance, when combined with a flashpoint like the one we saw on Burnaby Mountain, can be an unstoppable force. Right now, the task is to build a movement that can be ready when the time comes.

The Coast Protectors network is already 20,000 strong, and the Treaty Alliance  Against the Tar Sands unleashes the combined power of more than 100 First Nations and Tribes from across North America who have pledged to collectively resist construction of any tar sands pipeline through any of their territories – including Kinder Morgan.

On their own, legal wrangling, provincial push-back and popular resistance might not be enough to stop this pipeline. But all of these forms of opposition lead to the same thing: uncertainty, delay, and increased costs for Kinder Morgan. Some companies can withstand this type of risk, but in this time and place, Kinder Morgan might not be one of them.

Kinder Morgan’s finances have been called a ‘house of cards’ by Wall Street analysts, and recently narrowly avoided having their stock downgraded to ‘junk’ status. With ever-rising project costs, and an oil market that has changed significantly – and some say permanently – since Kinder Morgan first proposed the Trans Mountain project, the company has also announced it is seeking a joint venture partner in an effort to offload some of the costs and risks of its BC pipeline. Oh, and ‘oracle’ investor Warren Buffett has just dumped all of his Kinder Morgan stock.

In short, Kinder Morgan is more vulnerable to certain risks than other companies, and if delays and costs continue to increase, at a certain point the Trans Mountain project will no longer make economic sense for the company behind it.  And if there’s no longer money to be made, Kinder Morgan walks away.

So what can I do?

In the next few months, there are two key ways to get involved.

Get ready to vote for the coast! The BC election is a moment when each of us has the chance to shape the kind of province we want to live in, and elect politicians who will stand up to big oil and the federal government and protect BC from Kinder Morgan. From asking questions about where your candidates stand on Kinder Morgan, to writing letters to your local paper, to making sure your friends and neighbours get out to vote on election day, there’s something for everyone to do.

If you want to help Pull Together, or get involved in making sure Kinder Morgan is front and centre in your local race this election – or if you have questions or comments about anything in this post! – drop me a line at alexandra@georgiastrait.org and let’s talk. It’s a new chapter in the campaign to stop Kinder Morgan, and we want to hear all of your ideas and feedback.

3 thoughts on “How we stop Kinder Morgan now”