After two years and thousands of pages of evidence, the final stage of the National Energy Board review of the Kinder Morgan pipeline has arrived, with oral hearings taking place in Burnaby and Calgary this month. 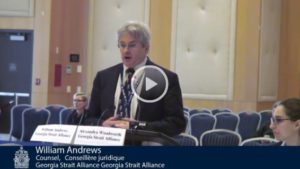 It’s a chance for intervenors like GSA to make our case directly to the panel as to why this project should not be approved. As well as stating our grave concerns about the project’s impact on the marine environment, the climate, coastal communities and the economy, GSA’s final argument hinges on two key points. First, failures in oil spill response planning put communities and the environment at unacceptable risk from an oil spill. Second, Kinder Morgan’s admission that the project will have serious negative impacts on our endangered killer whales cannot be justified. Find out more in our final written argument. You can also watch a video of our oral presentation to the panel (starting at 5.44), or read the transcript.

Just as importantly, the oral hearings are a moment for everyone who wants to see a different future for our region to raise our voices and make it clear that we will hold the Prime Minister to his promise of a fair hearing for Kinder Morgan – and we will never allow this pipeline to be built. 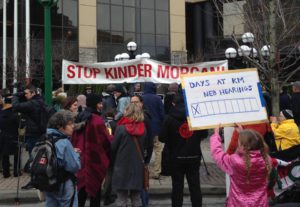 Rally outside the NEB hearing in Burnaby

And raise them we did – with two big rallies, a daily presence outside and inside the hearing rooms by a broad coalition of groups, sit-ins and letters calling for the NEB to open its doors to the public, a major petition delivery, and a two-week blitz of media coverage highlighting the need to fix the process and reject the pipeline.

As the pressure mounted, the federal government announced that it would be imposing a new round of review on Kinder Morgan, including a partial climate test – a welcome step forward, but falling far short of what’s needed.

The hearings move to Calgary next, where the City of Vancouver and a number of industry intervenors will present. It’s important to keep up the momentum, so keep tuning in via the NEB’s live-stream and sharing your thoughts on social media using the hashtag #StopKinderMorgan. The full schedule of intervenor presentations is available here.

What comes next? While the NEB prepares its report to Cabinet and the government implements its additional review, it’s our job to show Prime Minister Trudeau that he has no choice but to reject the Kinder Morgan pipeline. With the Province of BC now joining local governments, First Nations and the public in opposing the project, it seems that victory just might be within our grasp.