This weekend, the largest climate march in history will take place in New York ahead of the UN Climate Summit, and millions of people around the world will take to the streets to call for real, fair and urgent action to tackle the climate crisis. 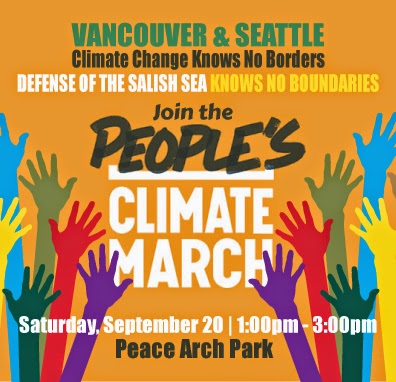 Here in our corner of the world, the Salish Sea is poised to become one of the largest fossil fuel exporters on the planet. The dozen new or expanded oil, coal and LNG projects proposed for our region put the people, ecosystems and economy of the Salish Sea at risk, and make the Pacific Northwest ground zero in the battle to stop climate change.

Americans and Canadians of the Salish Sea share one coast, one ecosystem and one climate, and it’s time to work together across the border to stop our shared waters from becoming a fossil fuel superhighway.
On September 20th, if you care about the Salish Sea, or the creatures and communities that depend on it, there’s only one place to be: standing with our American neighboursat a rally at the Peace Arch border crossing to demand unprecedented action to defend the Salish Sea and our global climate from fossil fuel development.
You’ll hear inspiring stories and fantastic music. You’ll learn about a new treaty to be signed the next day by First Nations and US Tribes, which will reflect indigenous laws that have existed to protect the land and water since time immemorial and will act as a cross-border tool to defend the Salish Sea. You’ll sit down for a potluck picnic with your neighbours from both sides of the border, and swap stories, lessons learned, hopes and fears for our region and our planet. You’ll beinvited to sign a pledge committing to take action – whatever that means to you– to stop new fossil fuel exports on the Salish Sea. Most of all, you’ll be part of a moment in history when people came together and chose a different path.
We know that spending the afternoon at the Peace Arch takes a bit of time and effort. But we all know, deep down, that the climate crisis isn’t going to be solved just by switching to efficient light-bulbs or emailing your MP – or by anything you can do on your own. Like all the big social movements that have won sweeping change in the past, from the Suffragettes to the civil rights movement, we need millions of people to step out the front door, take to the streets, and stand up to be counted – together.
It’s going to be worth it. See you at the Peace Arch!
PS. In case you’re worrying about border line-ups or passport problems, don’t! The Peace Arch park is a unique place where you can meet and mingle with citizens of another country without crossing a border or going through customs. And we are providing buses from Vancouver to make the journey easy. Click here for more info on transport and other practicalities.