M&M just finished another great weekend, with beautiful sunshine to keep us company! On Saturday we went to Victoria to celebrate Mountain Equipment Co-op’s Paddlefest, an amazing event where beginner to expert paddlers were showing off their moves in the calm waters of Willows Beach. Then we finished off the weekend with a relaxing trip to Cedar, where we enjoyed a busy day at the Farmers’ Market, one of our favourite local markets. We had lots of interest at our booths all weekend, but for this week’s blog, I’d like to introduce our new activity, which we unveiled on Sunday.

With last week’s launch of GSA’s Save the Salish Sea campaign, it only seemed fitting to create an activity that would show what might happen if there were to be a spill of tar sands oil into the Georgia Strait. So we developed a visual aid to highlight the risks. Just what would happen in the event of a heavy oil spill on BC’s south coast? Unfortunately, we don’t have definitive answers at this time because an independent, comprehensive risk analysis has never been performed for a heavy oil spill in the Georgia Strait – despite the fact that tar sands oil is already being shipped through our waters. We can only hypothesize what could happen here based on independent scientific studies performed in other geographical areas and in a lab environment. These studies have shown very interesting – and controversial – results, which are summarized below. But first, just what is being pumped to our coast? The answer: diluted bitumen.

The Alberta tar sands produce thick oil called Bitumen, which has the consistency of peanut butter. In order for this oil to be able to flow through a pipeline, it must first be diluted with a diluent, usually a less dense form of oil or gas (such as natural gas condensate, which is extremely toxic and flammable). Once diluted, the bitumen (now referred to as Diluted Bitumen) can flow easily through the pipeline and becomes less dense than water. The diluent is itself a danger, containing toxic chemicals such as benzenes, paraffins, naphthene, or heavy metals.

When exposed to natural weathering such as wave action and UV radiation from the sun, spilled diluted bitumen has been shown to separate. In other words, the diluent evaporates into the atmosphere, and as a result the diluted bitumen becomes less and less dense, sinking to the bottom or becoming suspended between the surface and the ocean floor. This can cause a host of other difficulties. If spilled oil sinks in the ocean, it becomes much harder to clean up. Manual removal using booms and other collection devices can’t be used beneath the surface, and viscous bitumen is resistant to chemical dispersants. In other words, as an Environment Canada scientist put it, our existing spill response technologies are unlikely to be successful at significantly controlling a spill of diluted bitumen. Diluted bitumen has also been shown to bind to sediments in the affected water body, which make it heavier and can cause it to sink faster. Because of the Fraser River, the waters on BC’s south coast are full of very fine river sediments.

Heavy oils such as bitumen are known to have serious effects on the overall health of the environment. Some impacts that could result from an oil spill in BC waters include: death of plants and animals, harm to people living nearby, and destruction of habitat including breeding habitats. Oil of any type is extremely persistent, and studies have shown that oil can remain in the environment after 30 years, and may even persist for as long as a century. 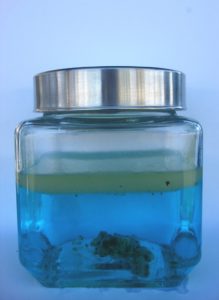 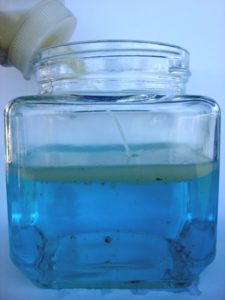 Our interactive display aims to visually represent how diluted bitumen may separate over time and cause the heavy bitumen to sink. Have a look at the pictures above; the blue stuff is plain old water with a little food colouring. In a bottle we mix vegetable oil (representing the diluent) with a much thicker herb salad dressing (representing the bitumen). The oil is less dense than the water so it floats on top, while the dressing is denser so it will sink in the water. However, when the oil and dressing are mixed together and poured into the jar on top of the water, the mixture floats on top. Soon after adding the mixture, the dressing starts to separate from the oil and sinks, leaving the oil floating on top. After a few minutes, a few gross blobs of dressing rest on the bottom of the jar, representing the bitumen that could stay on the sea floor and wreak havoc on the invertebrates and delicate kelp species that live there. Of course our experiment happens at an accelerated time scale and doesn’t account for wind and wave action and other factors that would affect a diluted bitumen spill in the ocean – but it does highlight the basic fact that bitumen is denser than water, and is a great way to get people talking about the risks of shipping tar sands oil.

If you’d like to see this experiment yourself, drop by our table at any of our events and say Hi (you’ll find me in Courtenay this Saturday and in Vancouver on Sunday, see our events page for more details). Or if you want more information about the proposed pipeline expansion and what you can do about it, check out the Save the Salish Seawebsite or the Georgia Strait Alliance website. Thanks for dropping by!