By the time the sun was rising over the city of Vancouver around 7:00 AM on March 28th, Communities Atlas Coordinator Rebecca Adams and I had been up for hours, making our way across the Strait by ferry to the first gathering of Georgia Strait Alliance’s innovative Waterfront Initiative.  It was an inspiring day, anticipated to be the first of many occasions bringing together representatives from a broad range of sectors to discuss a common vision – the revitalization of the waterfront of Metro Vancouver, and eventually beyond to the entire Georgia Strait region. 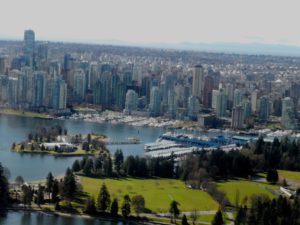 The Waterfront Initiative is being developed to address the challenges faced by our urban ecosystems in the face of increasing population density and the tension between the often conflicting needs of users of our waterfront.  Modeled on the highly successful  Metropolitan Waterfront Allianceof New York and New Jersey (MWA), this initiative has been launched by GSA (under the leadership of Ruby Berry), and will be directed by  a multi-sectoral Waterfront Advisory Committee.  The project promises to help address the social, economic and ecological facets of our waterfront, resulting in a waterfront that serves the many needs of the 3 million residents of the Georgia Strait region and allows for growth within a flourishing ecosystem.
The MWA’s founder and CEO, Roland Lewis was the keynote speaker at the March 28th event, held at the YMCA on Hornby Street in Vancouver.  Representatives from Metro Vancouver, local municipalities, conservation organizations, foundations, labour unions, Port of Metro Vancouver, cultural and science organizations gathered to hear first-hand about MWA’s experience bringing together over 700 organizations to work together to achieve a common vision for the waterfront of New York and New Jersey.  We were inspired by MWA’s approach, as they sought common ground and looked for issues that united often competing constituencies, an approach that fits well with GSA’s own solutions-based focus to addressing threats to the region.  If you were not at the event and would like to learn about Mr. Lewis’ presentation, watch our website for an online version, coming soon. 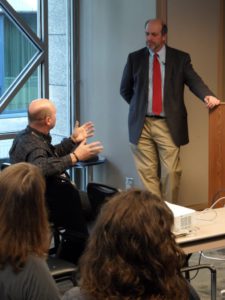 Participants from a variety of backgrounds were united in their excitement about the possibility of collaborating toward a common vision for Metro Vancouver’s waterfront, and were eager to start the process of figuring out what the initiative will look like for the Vancouver area.  There was a great deal of enthusiasm about the “big tent” approach to collaborating employed by the MWA – membership in MWA is by participation, offering opportunities to a broad constituency with the main criteria being buying in to the big vision.  Through this method, MWA has succeeding in galvanizing the citizens and leaders of the NY/NJ region to change their locality for a better future for all. 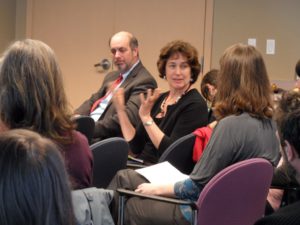 The coming months and years promise to be exciting, as the Waterfront Initiative gains structure, develops plans (including measureable goals) and increases its reach.  The resulting transformation of the waterfront of Metro Vancouver into a clean, accessible, productive place holds so much promise.  This vision includes opportunities for recreation, transportation, education and industry, built on a foundation of rich marine life, improved freshwater and natural areas will mean sustainable communities for all of us who live, work and play here.  This may seem a lofty goal, but as seen from the MWA‘s successes, we know that with a lot of work, strong leadership and a lot of collaboration, it is possible.  As one event participant said, it is daunting, but we need to start the process, build relationships, and keep our eyes on the long view.