On December 26, 2012, Rebecca Tarbotton died in a freak accident while on holiday with her family in Mexico. From everything I’ve read about Rebecca in the media reports that followed, she was a passionate, intelligent, committed and funny person, loved by those who knew her and respected by many more – even those against whom she battled. The Vancouver native’s passing at the age of 39 was tragic and as Executive Director of the Rainforest Action Network, her loss reverberated beyond her organization to the worldwide environmental movement. We lost one of our brightest leaders, someone who had made an incredible difference in our world. One can only imagine what other great things she would have done had she had the chance.

I didn’t know Rebecca, but her passing has been on my mind a lot in the last few months. Like so many of us who have chosen environmental advocacy and social change as our professions, Rebecca struck me as someone who believed that her hard work today was going to create a better, healthier world for everyone. The motivation of an ‘environmental activist’ is unselfish: to speak for those who cannot take action, against those who are driven by self-interest.

Just before I sat down to write this, I read a Guardian article on how the Canadian government is now using taxpayers’ money – yours and mine – to spy on organizations they describe as “enemies of the state”. These groups only want to ensure that the health of future generations is factored into government decision making, yet their peaceful marches and expressions of opposition are labelled “terrorism”. How exactly did we get to this point?

Somehow the PR machine of our democratically elected federal government has decided that the same groups whose work resulted in the banning of toxins such as DDT and PCBs and the protection of waters and lands across this country – all of which benefit individuals in the government as well as other Canadians – are now to be viewed as impeding what is best­­­­­ for our citizenry.
This is scary enough, but what concerns me more is the power and influence of the vocal minority who openly agree with this assessment. When did ensuring we had clean air and water become a negative? At one not-so-distant time in history, Presidents, Prime Ministers and even industry leaders stood up for the protection of forests and rivers and oceans – and they were lauded for it. Today, in Canada, these are deemed as impediments to “progress” and those that want their protection are “the enemy”.
Our country is at an important crossroad. The damage that the energy and mining sectors, with the help of our federal government, are doing to our environment will have heavy ramifications for generations to come. The vilification of environmental advocates, along with efforts to silence them through media attacks and threats to their charitable status, will give added strength to those efforts to destroy what we citizens have spent decades trying to protect.
In the face of these forces, silence is not an option, and the great news is you haven’t been silent at all.  You have signed petitions, attended events and made what you value clear to our leaders. Beyond this, many of you have made the important decision to support groups like GSA, so that we can be an even stronger voice for you. In 2012, GSA’s membership jumped by an incredible 36%, at a time when so many people’s budgets are tight. We can’t thank you enough for your support, as it tells us we’re on the right track – and puts us in a great position to do even more. 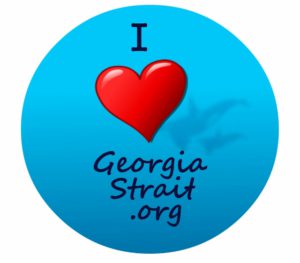 Since there is “strength in numbers” – and the challenges facing us require a great deal of strength – we hope you will help us build our community of donors even more in the coming year. You have made the decision to support GSA because you believe in what we do. We’re certain there are many in your network who feel the same, so why not invite a friend or colleague to become part of the GSA family? They can make a donation online or by mail and when they do, they will be helping us grow even stronger.

The coming year promises to be very exciting and in the coming months we look forward to sharing more ways for you to be involved. Being a part of this great and growing community is inspiring.
Now, whenever I read about another attack on our environment or on environmental groups, I will think about Rebecca Tarbotton – and about how more and more of us are coming together to build on the amazing work she did.  We are growing, and we will hold high the torch she handed us.

2 thoughts on “Holding the torch high – together”