Not only has participation in Clean Marine BC, our voluntary eco-certification program, been growing in leaps and bounds – our marinas and yacht clubs have been raising the bar on environmental best practices! The top five-anchor CMBC rating was an elusive achievement for almost seven years until it was awarded for the first time to False Creek Harbour Authority’s Fishermen’s Wharf in January 2014. That distinction went unmatched for more than four years until this spring, when three new five-anchor ratings were finally awarded.

Congratulations are in order for the Royal Vancouver Yacht Club and Maple Bay Marina! 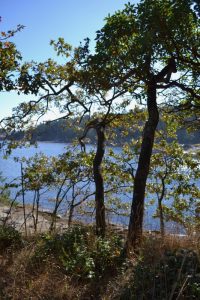 The Royal Vancouver Yacht Club’s main facility at Jericho has been CMBC certified at a commendable four anchors since 2012, and they have now achieved CMBC certification at seven of their eight outstations – five were awarded four anchors, while Scott Point and Secret Cove outstations were the second and third facilities ever to receive the top five-anchor rating.

Environmental improvements at RVYC outstations include:

The club’s conservation initiatives are varied and diverse. They include flora projects, like the preservation of the Garry Oak, the only native oak species in Western Canada. Fauna projects include supporting the recovery of the Purple Martin, a vulnerable swallow, by attaching nesting boxes to dock pilings. Maple Bay Marina was initially certified at a very respectable four-anchor rating, eight years ago. Since that time they have taken our principle of continual improvement in environmental best practices to heart, and have done significant upgrades to become the fourth five-anchor rated facility. Among their upgrades are the installation of a new sewage pumpout station, a long-term dock replacement program, and upgrades to the vessel maintenance area to prevent contaminant runoff. School groups also visit Maple Bay Marina to learn about their eelgrass restoration project.

We are thrilled to work with all our CMBC facilities, and to recognize them for their efforts to not only implement and improve on CMBC recommended best practices, but to raise the bar and take on projects beyond those outlined in the Clean Marine BC Best Practices Handbook. We can’t wait to see what other innovations our facilities become involved with!