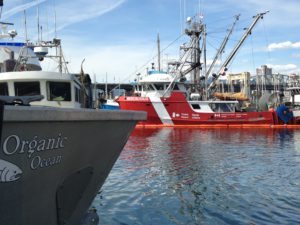 It’s been a busy few weeks on the oil spill front.

So busy, in fact, that I’ve put together a round-up of new developments related to oil spills, impacts and response on BC’s south coast.

May 27th was the deadline for intervenors in the NEB’s Kinder Morgan review to submit evidence to the panel, and the week brought a torrent of new reasons to be concerned about the project – all backed up by seriously credible expert research. Here are just a few related to a major oil spill along the tanker route, which could:

And that’s just some of the new information on oil spills (all from the City of Vancouver and partners); equally  powerful facts and stories emerged relating to climate change, long-term economic need and viability, impacts on First Nations rights, title and interests, and a host of other issues.

For our part, GSA submitted the results of our expert research assessing a fundamental question: Are coastal communities in the Georgia Strait adequately prepared for a marine oil spill? In short, the answer is ‘no’.  Despite having important roles to play, local governments are not adequately prepared to manage the consequences of a marine oil spill affecting their community, and engage in the multi-agency response effort – in large part due to poor communication and engagement from senior spill response partners, and a lack of resources.  Our next step is to take these lessons learned to local governments in the Georgia Strait – and some of the media coverage (see here, and here) of our report release is already raising great questions in coastal communities in the region.

At the beginning of June, in response to the Marathassa spill in English Bay, we co-organized a day-long workshop in Vancouver led by the amazing Dr. Riki Ott, a world renowned oil spill expert and marine toxicologist who has spent years organizing in communities in the wake of the Exxon Valdez, Deepwater Horizon and Kalamazoo River disasters. As well as highlighting the human health impacts of spills, Riki talked about the need for greater citizen and community oversight of spill planning and response, and how citizen-led initiatives have been successful elsewhere. Participants were keen to work together over the summer to engage with local governments, First Nations and others to start putting some of the ideas from the workshop into action – stay tuned for a full report and opportunities to plug in. In the meantime, check out this short video from the workshop:

And this week, hard on the heels of the Marathassa spill, Vancouver was hit with another spill – this time, diesel fuel in the waters of False Creek next to the tourist mecca of Granville Island.  Estimates of the amount spilled range from 30 – 5,000 litres – the picture is unclear in part because much of the spilled fuel evaporated into the air. Once again, we’re left with lots of questions: how could it take 5 hours for a boom to be deployed in the middle of Vancouver’s inner harbour? Why did it take so long to determine the source of the spill?  I went down to the dock where the ship suspected to be the source of the spill was moored to observe the spill response, and saw kayakers paddling through oily waters past booms and response vessels; a Hazmat vehicle silhouetted against Vancouver’s iconic downtown skyline; and organic seafood trucks coming and going from the docks. Clearly, we have also been left with another set of reminders of how much we have to lose.

Ironically, on the same day as the False Creek spill, the BC Minister of Environment announced a new timeline for long-awaited reforms to BC’s land-based spill response regime – focused mainly on the establishment of a province-wide spill response organization. The idea isn’t new, and until we see more information about how accountable this agency will be to the public, it’s hard to know whether it will represent progress (see our submission on the proposal from this time last year). But it is encouraging to see the acknowledgement of the need for an expanded role for communities, local governments and First Nations. Again, we look forward to more details – but regardless, the new legislation coming out in Spring 2016 will be an important focal point for some of the policy changes GSA is advocating for to improve spill response in BC.

So, it’s been a very busy month! As you can see, there’s a lot of really important information emerging at the moment that we want to share with you, your community  and your local government. So if you would be interested in reaching out to your council, hosting a gathering with friends or a public meeting to discuss these issues, or helping spread the word online – please get in touch!