After a very severe cardiac arrest in January (see Crossing The Strait of Georgia – A Very Personal Journey), it has taken many months to get back to a semblance of normal (as in before my cardiac arrest) life.
After almost five months and a number of complications I was finally given the all clear to start a cardiac rehabilitation program called “Take Heart” run at the North Ridge Fitness Centre in Nanaimo twice a week. It’s a fantastic supervised physical program that will last 3 months in total and is aimed at increasing my cardiovascular capacity and giving me more confidence to resume a normal life.

At the moment one of the activities is to spend time on a treadmill walking at a steadily increasing but still slow pace. While walking I have time to look out the window and contemplate what is happening in the world. Indeed, because I have had a great deal of time resting over the last few months, I’ve had plenty of opportunity to read and see and hear lots of news, so have much to contemplate.

Maybe it’s just my perspective but it appears to me that there has been an inordinate amount of reporting on the environmental challenges facing our planet. From extreme weather to oil spills to bill C-38 and more, there seems much to be concerned about at this point in time. More than usual maybe.

There also seems little hope that the concerns of those who care about the long term health of this region and the planet will ever be listened to by big oil and pipeline companies, shipping interests or our federal and provincial governments. Indeed we have been branded as “radicals” on the assumption that’s a bad thing, and our access to meager funding gets more hampered every day because of what they say. It seems like science and common sense and a truly healthy planet are no longer valued by these people and short term profits and growth are the only way. Sigh…and I continue plodding on my treadmill!

I suppose if I want to make parallels I could look at the all those environmental threats to our region, such as sewage,pulp and other pollution, habitat destruction, unnecessary resource development and fish farming as being similar to angina (pay attention now!) while Bill C38 is like a heart attack (almost the end!) for our environment.

Fortunately the treadmill has a view. Beyond the roads and the housing developments, the snow capped Coast Mountains are a backdrop to a beautiful blue of Georgia Strait, glistening in the afternoon sun. A lone sailboat slowly glides along near the shoreline making it’s way to adventures unknown and further out a tug and barge make its way towards it’s southerly destination. Out another window a BC ferry is leaving a wake on it’s journey to Horseshoe Bay on the mainland. And maybe, just maybe, I can see the tiny splashes of a pod of Orcas playing in the sun.

As I lookout on the Strait I remember all my own adventures on and around this amazing body of water. Of all the magical encounters with wildlife and the wild places still to be found by most. Of secluded coves and magical beaches. Of the enormous variety of plants and creatures above and below the water. Of rivers and streams that course down from spectacular mountains. Of an energy that changes with the changing moods of the Strait.

I also remember the hundreds, maybe thousands of wonderful people I have met during my years working to protect Georgia Strait and know how they care deeply about this very special part of our planet. And also of the hundreds of thousands of others who I have not met but know also care very deeply. 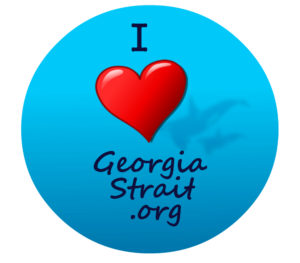 As I stare out on this biologically, spiritually and economically rich body of water, I know deep in my heart (which beats strongly now)that all is not lost. That there are many people who do care and who do get it. That commonsense and reverence and respect for the natural world has not disappeared. That, in fact, there is plenty of reason for me and everyone to be positive. That the Strait, Canada and the planet can get better, fitter, stronger, and more healthy! It will take some time and some bumps along the way but with determination and patience, anything is possible.

Now as I continue my rehabilitation, my program does more than give me hope for my own physical well being. It enables me to truly “Take Heart” for now and for the future.