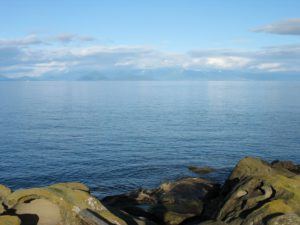 Just over 2 months ago I suffered a very severe cardiac arrest while teaching a Karate class on Gabriola Island on the west side of Georgia Strait. It was pretty instantaneous as I felt strange for just a few seconds before I collapsed and I was essentially dead before I hit the floor. There was no way of knowing this could happen to me and in fact I’d had check-ups fairly recently and in retrospect the medical folk can’t pinpoint any definitive factors that would have contributed to it happening.

Thankfully, our local vet, who also trains the volunteer firefighters in CPR, was right beside me when I dropped and his quick assessment and action, and along with my wife/ fellow instructor, kept my blood and oxygen flowing until help arrived. The rest of the class was amazing too. After 10 minutes of very aggressive CPR I was zapped back to life when the first responders arrived. One of the island doctors was also there within minutes.

With blood coming out of my lungs and a skin colour that I understand was less than attractive, it was pretty obvious that I needed to be airlifted ASAP and calls were made. Our local ambulance service raced me to the island’s sports field where we were met by a cardiac team from Nanaimo. When the helicopter arrived a decision was made to fly me straight to Vancouver rather than Victoria, where cardiac patients normally go, because of a big storm closing in on Southern Vancouver Island.

Despite having crossed the Strait of Georgia hundreds of times before, that journey in the middle of the night with a winter storm bearing down on us was the most significant of my life. I had a very clear choice that, despite all the medical help I was receiving, was one that only I could make. The easiest choice by far was to die. All I had to do was let my will go. It was not at all scary and not actually that challenging to contemplate. In fact it was quite a desirable choice.

When we landed in Vancouver yet another team of dedicated caring people took amazing care of me. I was in hospital for 6 days as I recovered enough to go home.

I may never know all the reasons why I chose to live that night as we flew in the dark across an amazing body of water that I have spent more than 10 years trying to protect but that was the conscious choice I made. It is without a doubt the hardest thing I have ever done, physically, mentally and/or spiritually. A fraction of a second loss of focus and I would have died.

It has been a long and challenging road since that night and although I knew that when I made the choice, I sometimes briefly wonder what possessed me to fight to live. Every medical person I have seen since shakes their head and says how lucky I am to have survived. Despite that I have essentially remained very positive most of the time even when things were bad enough to send me back to hospital. What has helped my recovery a lot is the amount of support I have had (and am still getting) from my family, friends, neighbours, colleagues and all the communities of which I am a part.

As my healing continues my thoughts are returning to my work with Georgia Strait Alliance and the magnificent body of water we are trying to keep healthy. As I’ve be convalescing I have spent a good amount of time looking out on the Strait of Georgia and trying to harness it’s healing energy. I am very thankful that we can connect to this special place.

I’ve also pondered on the parallels of my experience to the state of the world and in particular how people (me included) often take the easy route and accept the status quo especially where making money or keeping egos safe is concerned. No doubt if we all chose the easy path and stayed with selfish thought there would be no-one to left to keep watch over our waters, lands, and skies and everyone would be out there trying to make a profit without wanting or able to give anything to the planet in return.

Thank-you to all of you who choose to undertake and survive the hard journeys of this world! You make the world a kinder and healthier place and you inspire me to make more of those hard choices.