My name’s Gil – and when pronounced in Spanish the “G” sounds like you are saying “Hill” with a hard emphasis on the “H.” I’ve just recently joined GSA along with Dana Taylor as a community organizer.

As you can tell from my name, I am an uninvited guest on the territories of the Coast Salish Peoples, having been born in Chiapas, Mexico. I initially arrived in this region to study at Simon Fraser University, and since then I’ve made this area my second home. Prior to joining GSA, I worked with several nonprofit organizations, such as the Wilderness Committee, Media Democracy Days, the BC Poverty Reduction Coalition and Greenpeace. I’ve also been part of many grassroots groups with whom I’ve worked on a wide variety of issues and campaigns, including protecting rivers against privatization, defending our digital rights, advancing migrant workers’ rights, and advocating for Indigenous sovereignty and housing justice. Now that I look back, it sounds like a lot! 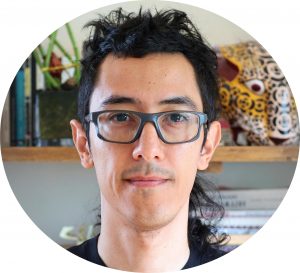 Throughout the years, I’ve taken on many roles to the extent that sometimes I feel a bit like a puppy who sees a toy and goes all out crazy for it, but then sees another, and goes for that one, and then another… you get the idea. For example, I love graphic and web design, but I am also comfortable doing facilitation and strategic planning, being in charge of logistics, or doing public outreach and volunteer coordination. I am also in love with bicycles and computers.

Being a racialized immigrant and being connected to struggles in Latin America for many years, I have been working on really difficult issues, such as climate disaster, gross human rights violations, and the emergence of a global surveillance culture, but I am still always keen to make sure that whatever we do, we make it inclusive, creative, and engaging, so that we don’t “preach to the choir” or wallow in despair.

That’s why some of the most memorable activities that I’ve helped organize include street theatre performances using Mexican wrestling (complete with masks, capes and high-flying kicks!), fundraising parties with home-made food and live music (you guessed it, lot’s of Mexican food), and good old marches, but with giant papier-mâché puppets, costumes, colourful signs, and funny chants.

I am excited to put into practice my experience, skills and interests at GSA to hopefully build healthier and more just communities for everyone – and there is certainly a lot to do: to prevent the loss of biodiversity, to stave off the impacts of climate change, and to rectify historical atrocities against Indigenous Peoples. My hope is that we can come together to protect and uplift one another, and to ground ourselves in justice.