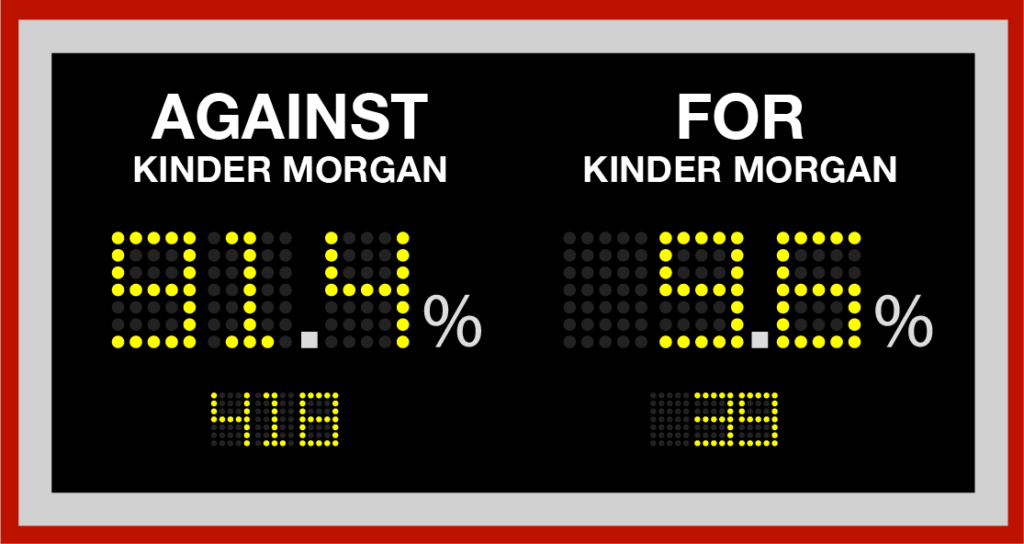 The final numbers are in, and it’s bad news for Kinder Morgan.

In the depths of summer, over 1700 British Columbians came out to the federal government’s panel meetings on the Kinder Morgan pipeline and tanker project – and over 91% of speakers were firmly opposed.

Speaking passionately and eloquently, from Kamloops to Victoria, determined community members stepped up to the microphone and told the panel why Kinder Morgan is the wrong choice for BC. People talked about the unacceptable risks of an oil spill to communities and wildlife, respecting the wishes of First Nations who are saying ‘no’, the need to invest in clean energy instead of fossil fuels as the world comes together to cut carbon emissions – and countless other reasons why the federal government must reject Kinder Morgan. They were joined by 17 First Nations, 21 municipalities, the Mayors of Vancouver, Victoria and Burnaby, MPs and MLAs, and local businesses, all of whom echoed a single fundamental message: BC communities do not give their consent for this pipeline.

THANK YOU to each and every one of you who spoke up and packed the meeting halls this summer! 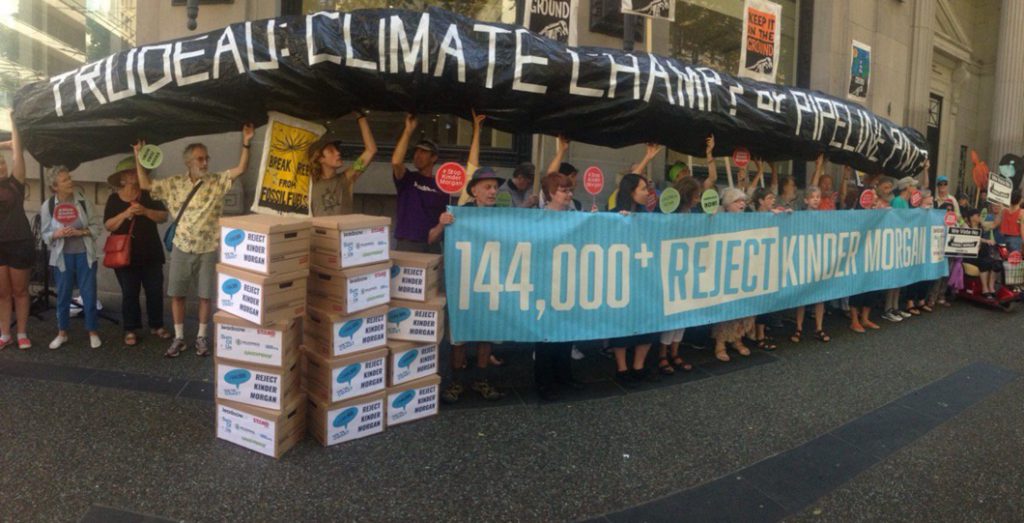 At the Vancouver town hall, a huge crowd delivered a petition with 144,000 signatures asking the Prime Minister to reject Kinder Morgan. Image courtesy of For the Coast.

The depth of feeling at these meetings was powerful. Here in BC, we are passionate about defending our home: about protecting the land, water and wildlife we all love, and about leaving a strong, sustainable economy and a liveable climate for future generations.

The panel underestimated just how much British Columbians care about this issue, and just how many were willing to take time out from their summer plans to stand up and be counted. In Vancouver and Burnaby, the public town halls ran on into the night – no surprise for communities that have been waiting over three years to be consulted on this project. In North Vancouver, time ran out before everyone had spoken, including people who had travelled from out of town to have their chance to be heard. In Victoria, an over-capacity crowd left 120 people locked out of the meeting room entirely.

Hundreds of citizens locked out of a Kinder Morgan review process – is anyone else have a sense of déjà vu? This panel was set up to fulfill the Prime Minister’s election promise to ‘redo’ the Kinder Morgan review, and address the gaping flaws in the previous National Energy Board process. But there is simply no way one could argue that the panel has achieved this goal: it was doomed from the start by the arbitrary timeline set by the federal government, requiring the panel to do a large scale public consultation in only a few short months. 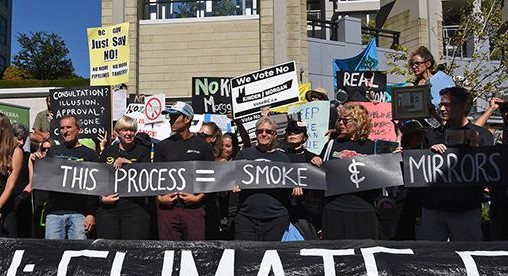 Rally outside the Victoria town hall: This process is smoke & mirrors! Image courtesy of For the Coast.

The result was ‘drive-by consultation’, as the Chief of the Cheam First Nation put it. Meetings held on short notice, in the middle of summer, during work hours. Coastal communities largely excluded. No hearing record but the private notes taken by panel members, one of whom has a past relationship with Kinder Morgan. No official tally of the positions taken by speakers, no list of who was invited or attended. A Councillor in Kamloops found out about the local government round-table on Facebook. The list of failures goes on and on; check out the take-down of the process over on the Dogwood blog for more. Perhaps Dr. Eoin Finn described this ‘supplementary review’ best: “The NEB process is possibly the greatest farce ever inflicted upon Canadians, up until this.”

So what comes next? The panel will now prepare its report to Cabinet, expected by November 1st. A worrying hint at what this might look like is provided by panel Chair Kim Baird’s recent Op-Ed in the Globe and Mail. (Have you ever heard of the chair of a panel process opining – some might say spinning – in a national newspaper while presiding over an ongoing review? No, me neither.) Ms. Baird says, accurately, that many diverse views were expressed to the panel, but ignores the fact that pipeline supporters at the panel meetings were outnumbered 9 to 1. The result gives the perception of balance where there was none. The answer was ‘no’.

Clearly, we need to keep up the pressure this fall: on the panel, on Cabinet and on the Prime Minister. You can start by submitting your comments in writing to the panel by September 30th– especially important if you weren’t able to speak up in person. You can also help by spreading the word about the overwhelming opposition demonstrated at the panel meetings on Facebook and Twitter.