In January 1993, up in Genoa Bay, we bought a twenty year old 37 foot ferro cement sailboat from John Sampson. We circumnavigated Vancouver Island that year, and then for a number of years averaged 100 nights onboard up the outside coast north of Tofino. We wintered in the Sea of Cortes 96/97 and then lived on and off the boat in Comox & Tsehum Harbour through till 2008. Though the engine had died in Mexico, and we had removed the old Atomic, we had successfully sailed up through Arran Rapids and north with a small 5hp on the stern. Ashore 2008, after 6 great weeks in the San Juan’s, we became overwhelmed caring for a 100 year old heritage house in Victoria. On the cement-hulled boat the wood decks leaked, mold set in and 3 weeks painting, cleaning and a refit in the summer of 2011 gave us only 10 days at a can in Sidney Spit. 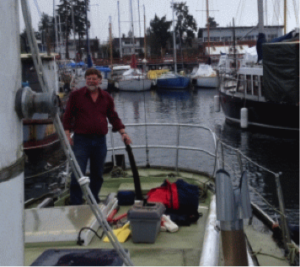 Her last transit before being broken up

I turned 60 in early 2013, and with bad arthritis, we bought a wonderfully maintained 30 year old Campion 310 trawler. Two happy summers up the Broughton’s, Barkley Sound etc and we knew we would never use our sailboat again. And the mushrooms on the ferro-cement sailboat were taking over. What to do?

Sinking her seemed un-ethical – no fuel tanks or engine, but lots of wood, deck-head insulation from Mexico, arborite, wiring etc would float off and be a hazard. We had a ton of offers of those wanting to use her as a “live-aboard”. Fireplace, gimballed oven, water-maker, spacious and for free – but with a broomstick up her shaft tube few have the skill today to sail 11 tons without any reverse shifter – so she would probably have ended up a derelict sinking in some small bay.

So we binned her.

I’ll be honest around the costs, as that is what everyone questions us on. I’m not sure we did this the best or cheapest way, but I’ve 40 year’s boating and shipyard experience along this coast and it made sense to me. We didn’t ask for quotes for each stage, or dicker – we just paid what was invoiced.

We had stripped the boat in June 2014, gone travelling, and then late November co-ordinated the mast removal, crushing and disposal in less than a week (start to finish). Wow! 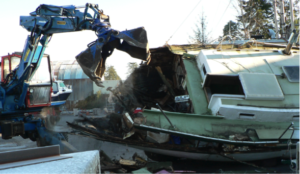 The jaws of doom

It was emotional to see a boat we had lived on, raised our girls on, grounded, had fires onboard, etc etc (as all boater yarns go), being crushed in chunks as if some tyrannosaurus was attacking the TWO of US. But we feel a monkey is now off our backs, that our loved boat will not blight our gorgeous coastline as some derelict, and that we have done the right thing – and can now move on.

Thank you to those that had patience as we came to this decision, and helped us as we did it! And to all the old salts that sauntered by proffering free advice and offers to help us selectively remove parts they saw of value. We fondly remember our gleaning various “treasures of the bilges” offered on VHF each morning on the cruisers net in the Baja.

5 thoughts on “We Binned Our Boat”