It’s been more than a day since the results of the BC election were finalized and I’m still trying to read the tea leaves of what British Columbians have told us.
The results of the election are – to say the least – puzzling.  At a time when we need action on climate change, no increase in tankers on our coast, and protection for wild salmon from the impacts of fish farms and other threats, voters elected a government that did not even mention salmon in its platform, and only twice mentioned climate change (one of those mentions was simply a boast about past policy announcements, many of which are no longer in place).
In the months and weeks leading up to the vote, thousands of citizens had spoken out or taken action to oppose new pipelines and tankers on our coast. From our perspective it seemed that British Columbians were telling us clearly what kind of leadership they wanted.  Yet the electorate voted for a government that put forth just “five conditions” for accepting these developments – conditions which can be met with a few tweaks and a cash transfer.
How do we explain the dissonance? 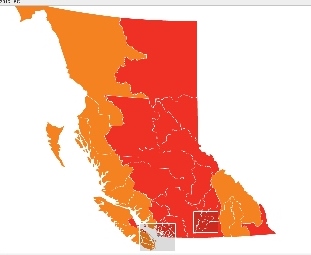 One place to start looking for answers is in the map of election results, which reveals a stark regional division. In the Lower Mainland, the results were mixed, but elsewhere along the entire length of BC’s coast, all but a single riding elected representatives from parties that had made a commitment to take action on climate change and to oppose the Enbridge and Kinder Morgan proposals. In the rest of BC (other than the Kootenays), it’s a different story.  Surely, the divided values in our communities reflected in this map cannot bode well for our province as a whole.
We also have to look into why almost half of eligible voters in BC choose not to vote. It’s possible some were happy with the status quo and felt no need to engage. Others may have been completely turned off by the heavy advertising and “attack” style of modern political campaigns.  Or perhaps our first-past-the-post electoral system has caused people to lose hope that their perspectives can be represented in our legislature, so they’ve given up trying.  Sadly, by choosing to stay home, they may have turned that fear into a reality.  Perhaps it truly is time to press for electoral reform, at both the provincial and federal level, since the current system does not allow all perspectives to be presented in our legislature.  However with the current system benefiting the winner, there is no political motivation for those in charge to make this change.
More significantly, I believe, most people still believe that the economy trumps the environment.  Long term economic sustainability cannot be built on the sale of our raw resources to Asia and at the risk of our own environment – the true foundation for long term economic sustainability is a properly protected, healthy and sustainable natural environment. But during the latter part of the election campaign, a “jobs through economic growth at all cost” message started to dominate, and despite being very short on facts, eventually won the day with the majority of voters.
Clearly, the environmental movement did not reach the majority of British Columbians with the fact that “jobs” and “the environment” are not two opposing values – they’re one and the same. Our task now must be to find better ways to get that vital message across, so that fear of the unknown doesn’t continue to trump facts.  Climate change cannot be seen as an “environmental” issue – it is very much an economic one.  If we don’t get that right, and soon, our world will be in serious trouble.
In our country it certainly doesn’t seem like government leaders are getting this right. Our federal government has been criticizing world-renowned climate scientists while putting its tar sands promotion into high gear, and now our provincial government also appears to have sets its sights on building a fossil fuel-based economy at all cost.
So what do those tea leaves tell me about where we can go from here?
Of course we’ll keep encouraging leadership from provincial and federal government officials, but for now, if we want leadership on climate change and sustainability, I believe we must look for it at the local level. If we’re to protect our local waters, build healthy waterfronts and grow our economy for a sustainable future, we will need to focus on those individuals, businesses, local and regional governments who are stepping up to the plate because – unlike our unlike senior government leaders – they understand what we have to lose by continuing along the path our society has been on. We may not be able to find the leadership we need in Victoria or Ottawa, but we can – and must – find it along the bays, inlets and shorelines of the communities who understand and care so much for Georgia Strait.

2 thoughts on “BC Election results: making sense of the tea leaves”