A coalition of conservation groups from Canada and the U.S. is calling on the Canadian government to take immediate action to protect Southern Resident killer whales.

Today, Ecojustice sent a petition to Minister of Fisheries and Oceans Dominic LeBlanc and Minister of Environment and Climate Change Catherine McKenna on Tuesday, requesting the Ministers recommend Cabinet issue an emergency order under the Species at Risk Act (SARA) to protect this endangered population of whales.

The petition is a response to the urgent need to reduce threats to the Southern Resident killer whales’ immediate and long-term survival and the lack of action by the government to date.

Located under Section 80 of SARA, emergency orders allow the government to create special protections for species at risk.

The petition calls on the Ministers to recommend Cabinet issue an emergency order to address three key threats to the Southern Resident killer whales.

Specifically, it calls for an order containing actions to: help increase the availability of Chinook salmon for the Southern Residents, limit the physical and acoustic disturbance from vessels that interferes with their ability to communicate and hunt, and complete the identification and legal protection of their critical habitat.

Under SARA, the Ministers have the authority to recommend that government issue an emergency order if they believe a species faces “imminent threats” to its survival or recovery.

Fisheries and Oceans Canada has previously acknowledged that the Southern Resident population continues to decline, and these recommendations are consistent with the federal government’s recovery strategy and action plan for Southern Resident killer whales.

Southern Resident killer whales are a genetically and culturally distinct population of salmon-eating whales that rely on the transboundary waters of the Salish Sea, a region that includes the Juan de Fuca Strait, Georgia Strait and Puget Sound.

The population currently numbers just 76, and further losses could result in extinction.

Representatives from the groups behind the petition released the following statements:

Jeffery Young, Senior Science and Policy Analyst, David Suzuki Foundation:
“Immediate actions are needed to rebuild Chinook salmon populations, the most important food source for the endangered whales. These include closing feeding areas to give whales quiet, unimpeded foraging areas and reducing Chinook catch to restore abundance. We can’t afford to see another year when the whales go hungry.”

Dyna Tuytel, lawyer with Ecojustice:
“Southern Resident killer whales are in crisis and we need to act now if we want to prevent their extinction. Emergency orders are an effective legal tool that the Canadian government can use to protect a species from imminent threats to its survival or recovery. We’re calling on Minister LeBlanc and Minister McKenna to act now to save the Southern Residents before they disappear from the Salish Sea forever.”

Christianne Wilhelmson, Executive Director of Georgia Strait Alliance:“This population is a bellwether for the health of the entire Salish Sea. If we do not take urgent action immediately to protect orcas by protecting Chinook salmon and making their home waters quieter, we risk losing them and undermining the health of the entire region, where 75 percent of British Columbians live, work and play.”

Michael Jasny, Director of Marine Mammal Protection at Natural Resources Defense Council:
“All of us in the Pacific Northwest, Canadians and Americans alike, are watching this iconic population die from starvation. Emergency action is necessary to restore the fish that the whales depend on and the quiet habitat that they require to feed and thrive.”

Misty MacDuffee, Wild Salmon Program Director at Raincoast Conservation Foundation:
“Government and independent analyses of this population indicate a 25 to 49 percent risk of extinction this century if conditions don’t change. The good news is they can also recover if we reduce vessel disturbance and increase the availability of Chinook salmon.”

Megan Leslie, President and CEO of WWF-Canada:
“We need to immediately reduce the threats Southern Resident killer whales face in order to increase their chances of survival. WWF-Canada urges Minister McKenna, Minister Dominic LeBlanc and Fisheries and Oceans Canada to use every available tool, including emergency orders under the Species at Risk Act, to quickly enact protections to safeguard these orcas’ food sources and foraging areas, and to reduce underwater noise and disturbance from marine vessels.” 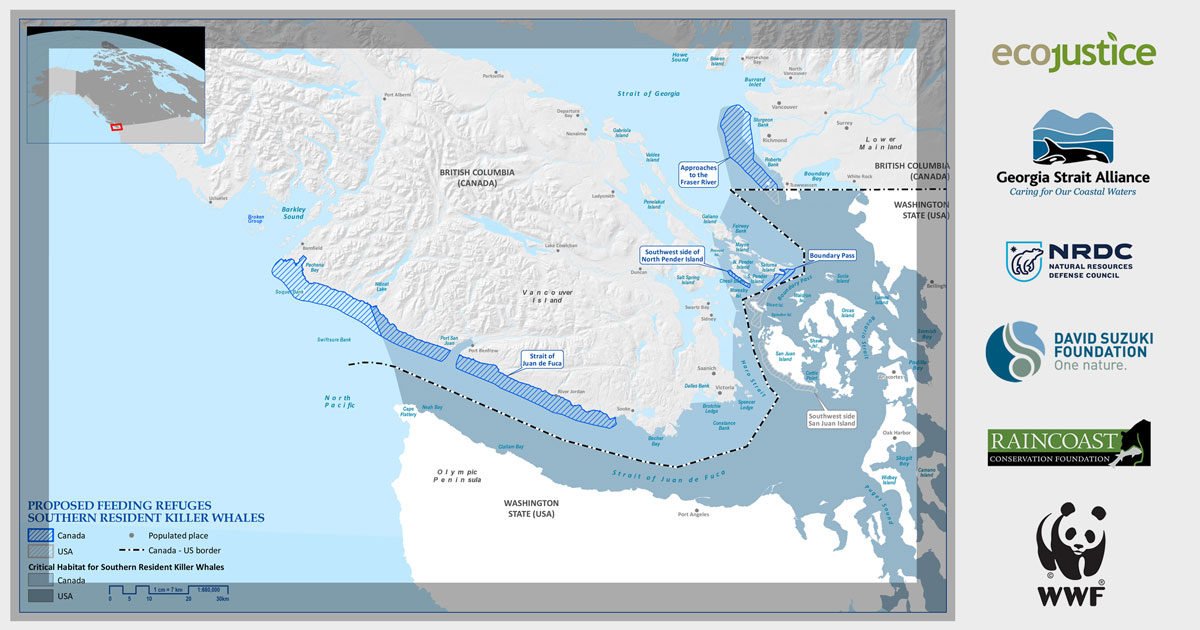