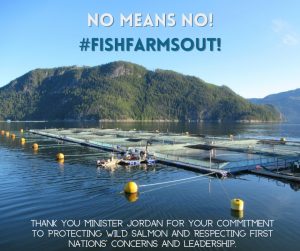 Today, a federal court dismissed an injunction request from aquaculture operator Cermaq, which sought to reverse the decision by Fisheries and Oceans Minister Bernadette Jordan to negate two transfer applications that would restock farmed fish at Cermaq facilities in the Discovery Islands.

“Today’s dismissal of the injunction is a lifeline to struggling and migrating wild salmon and also a recommitment to respecting First Nations’ concerns and leadership as the stewards of these lands and waters since time immemorial.

“Minister Jordan’s decision to immediately phase out Discovery Islands fish farms was based on consultation with First Nations in the area, concerned about the impacts of open-net farming within their traditional territories, and also on current science and the status of wild Pacific salmon stocks.

“The Minister’s decision has now been upheld in a federal court several times. It is time for the aquaculture industry to get serious about transitioning fish farms from open net-pens to closed containment facilities on land, which don’t use marine ecosystems to dispose of waste and parasites or sidestep reconciliation with First Nations, but will instead revive the local salmon economy.”

​In March of this year, Georgia Strait Alliance was one of a group of environmental organizations and an independent scientist, ​represented by ​Ecojustice​, a​s an​ intervenor in the judicial review​, arguing that aquaculture companies should not be allowed to transfer farmed fish into Discovery Islands fish farms, all of which are set to shutter by June 2022.