BACKGROUNDER
Salmon Farms Out of the Wild Salmon Narrows
June 16, 2009

Years of scientific research has built a global body of evidence that clearly shows open net-cage salmon farms cause ecosystem harm everywhere they are located.

CAAR is demanding the removal of the five active open net-cage salmon farms located in the Wild Salmon Narrows to the east and north of Quadra Island, in order to reduce the risk of sea lice infection to out-migrating juvenile salmon.

Thirty open net-cage salmon farm feedlots choke the north end of the Georgia Strait and one of the narrowest pathways is the Wild Salmon Narrows, along Okisollo and Hoskyn Channels, east and north of Quadra Island.

The farms to be removed are:

Altogether, these farms are licensed to produce 15,300 metric tonnes of Atlantic Salmon during every 18 to 22 month production cycle, discharging tons of waste into the fragile marine environment of the Wild Salmon Narrows and acting as reservoirs for sea lice that infect wild salmon.

In addition, there are four Marine Harvest inactive tenures in Hoskyn Channel, at the south end of Wild Salmon Narrows, which must also be relinquished.

Juvenile sockeye in the northern Georgia Strait are being infested with sea lice: 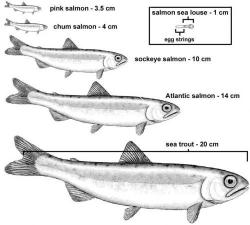 The Wild Salmon Narrows is a highly productive area of magnificent ecological significance and is at risk of devastating impact from open net-cage salmon farms. The abundant natural marine life being put at risk in this area include rockfish, ling cod, scallops, crab and herring as well as the extensive clam gardens of Wiaitt Bay. The whole region is located within Rockfish Conservation Areas.

There are at least eight wild salmon bearing rivers within this narrow channel.

Recreational tourists flock to the area, creating many local jobs. The abundance of the region has supported large populations of First Nations for thousands of years.

Commercial fishing is of great importance in the area, including salmon, ground fish, prawns and urchin fisheries.

All open net-cage farms must be removed from marine waters and moved to closed containment in order to protect the wild salmon and marine environment. CAAR is demanding the removal of open net-cage salmon farms starting in the Wild Salmon Narrows.