In an effort to predict the behaviour of oil from a spill in the Salish Sea, and to alert coastal residents to that very real possibility, we teamed up with Raincoast Conservation Foundation to map the potential spread of oil along the Kinder Morgan tanker route.

Since fall 2013, we have released over 4,000 small drift cards (4” x 6” pieces of bright yellow plywood, each with a unique serial number) at select locations along the shipping route from Vancouver to the Pacific Ocean. Just like a message in a bottle, the drift cards carry a simple reminder: THIS COULD BE OIL. When the drift cards are found and reported to us, their recovery locations help us map the course spilled oil might take, and how far it could travel. Our unique website allows real time drift card reporting and tracking of specific cards from drop to recovery.

While raising public awareness of a key threat from Kinder Morgan’s proposed pipeline expansion is one of our goals, this study will also be published in peer-reviewed journals, be used to validate and improve state-of-the-art ocean circulation models and ultimately help to establish which communities, recreational sites, species and sensitive habitats could be affected in the event of a spill. 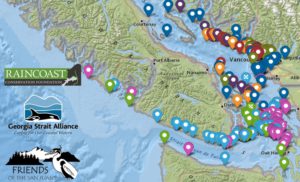 See where cards have been found, zoom in on your local area, report a card you’ve found, and more! 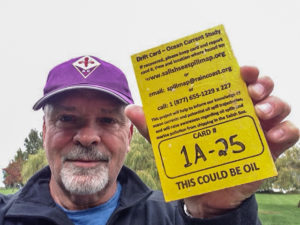 The places drift cards have turned up and the people who found them. 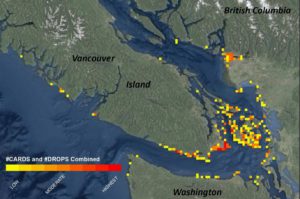 Read the preliminary results from the project

The whole west coast, from Seattle to Haida Gwaii, could potentially be at risk.

Check out these maps from Raincoast 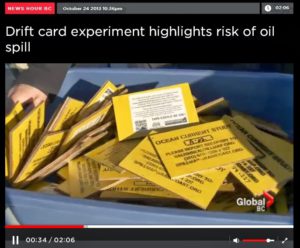 Watch us explain the project in this TV clip