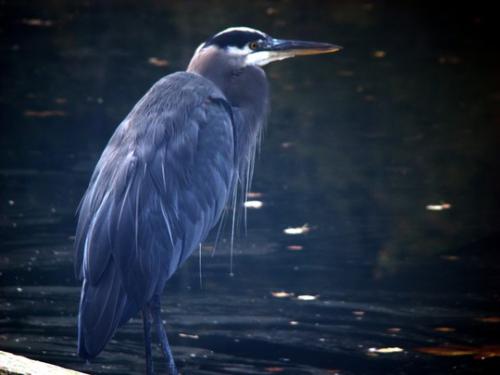 In March or April, females lay 3 to 5 eggs and for the next month, both males and females incubate them. Within two months, the young reach their adult weight of 2 to 2.5 kg and are ready to leave the nest.

Great blue herons live up to 10 years on average, even as long as 18 years – although fewer than 20% survive their first year.

Herons are very sensitive to activity near their nests, especially early in the season. Though they can get used to day-to-day human activity, novel noises (such as sudden blasts of horns or chain saws) can cause them to leave their nests, making the young vulnerable to predators such as eagles.

Learn more about these amazing birds 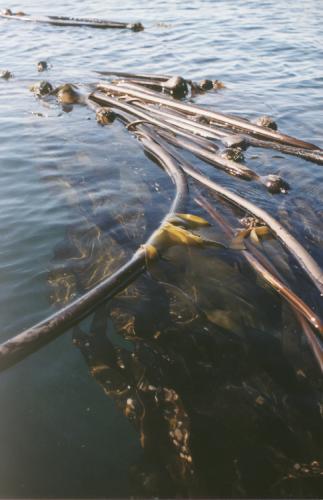 Over the summer, bull kelp grows around the Strait — fast!

From late spring through the fall, you’ll find bull kelp along Georgia Strait’s rocky shores and reefs, from the lowest part of the intertidal zone down to about 65 feet deep.

“Forests” of bull kelp provide habitat for many small fishes and invertebrates such as hermit crabs. Kelp forests are are also helpful to boaters — they show where there are shallow reefs that we need to avoid hitting!

Bull kelp can grow up to 80 feet long!

It attaches to the bottom by a holdfast, which can be up to 16 inches across. The blades at the top of the stem can grow to 10 feet long! A thick, gas-filled bulb holds these blades afloat, allowing the plant to get the sunlight it needs to grow.

The most amazing thing about the bull kelp is that all of this growth occurs in just one single summer season! Bull kelp is an annual plant, so like the nasturtiums in our garden, it dies in the winter. But even then, it still serves a useful purpose.

After it dies and storms wash it ashore, bull kelp and other seaweeds provide food and shelter, all winter long, for tiny animals on the beach such as periwinkles, sandhoppers (beach fleas) and isopods. 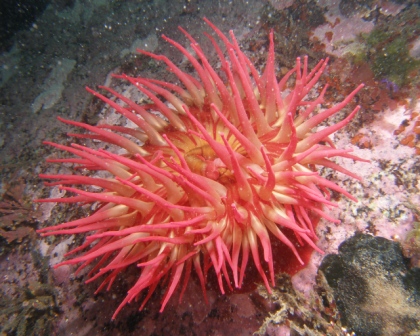 Anemones can’t move, so they feed during high tide, then close up when the tide goes out or when they’re disturbed. Although they’re among the deepest living sea animals, they can also be found in the lower part of the intertidal zone.

Anemones have been known to live at least 80 years, and some biologists think it’s likely they live to at least one hundred or even a few hundred years! 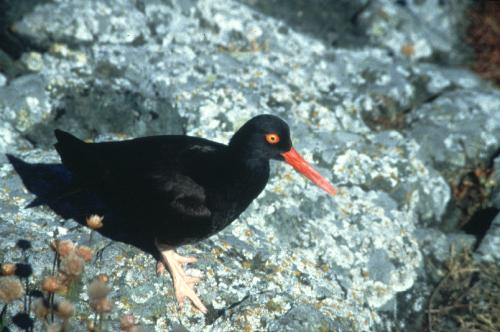 Beginning each April, black oystercatchers are breeding around our shores. Breeding pairs can stay together for many years and they nest in shallow depressions in the rock, very close to the water. They have 2-3 eggs per nest and tend their young through August.

Be very careful during this critical period to avoid disturbing these birds! It’s all too easy to unintentionally scare the parents away from the nest or step on the eggs. If you have a dog, be sure not to let it roam unattended along shores where oystercatchers are likely to be breeding.

Oystercatchers are somewhat misnamed – while they use their strong bills to dislodge food and pry shells open, they mainly feed on mussels, limpets and chitons as well as crabs, isopods and barnacles. Oystercatchers hunt in the intertidal area searching for food visually and often feed so close to the water’s edge that they must fly up to avoid the surf. 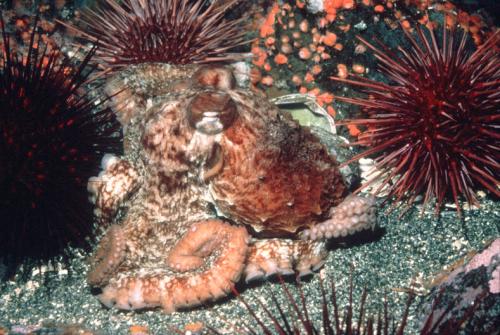 On winter nights when the tide goes out, life in the intertidal zone can be quite different from what you’ll see during the summer’s daytime low tides. Fish, crabs and sometimes even octopi come up from deeper waters to hunt in the shallows during the nighttime lows. Can you spot the octopus in this photo?