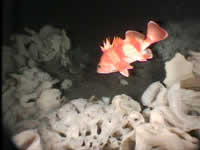 About 25 years ago, scientists from the Geological Survey of Canada were astonished to discover vast reefs, formed by colonies of hexactinellid glass sponges, growing deep in the Queen Charlotte Basin off the north B.C. coast.

Individual glass sponges are nothing unusual, but these great creations, found as deep as 250 metres and up to seven kilometres long and 20 metres high, were an extraordinary sight. Sponge reefs were common on Earth millions of years ago but were only known from fossil records. For paleontologists, the find was akin to running across a herd of apatosauruses in an unexplored corner of the Amazon. Manfred Krautter of the University of Stuttgart, an expert on Europe’s extensive fossil sponge reefs, called it “one of the most exciting and important scientific discoveries in the world”. 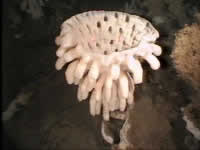 Environmental alarm bells started ringing at the same time, because the B.C. reefs, made of delicate accretions of silicon and up to 9,000 years old, are extremely fragile. In fact, half the reefs identified since the late 1980s may already have been damaged by bottom trawlers. In this fishery—a national disgrace, if there ever was one—heavy nets are dragged across the ocean floor, indiscriminately killing all types of species and causing untold damage to marine habitat. In the summer of 2002, fishing closures were announced for the four main northern reef complexes. The Living Oceans and Canadian Parks and Wilderness societies, however, want to see stronger safeguards in place. These nonprofit organizations have been lobbying the federal government to designate the sponge reefs as permanent marine protected areas, or MPAs. Both have plenty of information about the reefs on their Web sites.

Now sponge reefs have been discovered in the Strait of Georgia. Recent surveys using multibeam bathymetry, a new digital technology that collects broad “swaths” of underwater data and is revolutionizing ocean exploration, have identified two reef complexes on McCall Bank, just off the Sunshine Coast, and one on Fraser Ridge, near the mouth of the Fraser. (Canada, incidentally, is a leader in multibeam technology, which allows the creation of precise, three-dimensional models of the sea floor.)

The Strait of Georgia reefs are not as big as the northern colonies, which cover hundreds of square kilometres. The southern formations are found in slightly shallower waters (90 to 210 metres deep), grow to a mere 14 metres in height, and cover only four square kilometres (individual reefs average two to 10 hectares in area). The Strait of Georgia reefs are also a different shape than their northern siblings. Scientists from Sidney’s Pacific Geoscience Centre describe them as streamlined “wave-form” mounds, while many of the northern reefs are considered more “sheet-like” in formation. Sadly, one of the southern reef complexes appears to have suffered massive damage, probably from trawl fishing.

The sponge reefs were explored from Canadian Coast Guard vessels, using both remote-operated and manned submersibles, sidescan sonar, seismic profilers, and the new multibeam technology. The resulting images reveal an eerie, ethereal submarine world. Individual glass sponges, which can grow to several metres in size and live up to 200 years, have a delicate beauty. Mostly white or yellow (though the Fraser Ridge sponges are brightly coloured), they form unusual funnel, cup, and tubular shapes with strange fingerlike protrusions. Only three species actually build the reefs; four other species, some shaped like bizarre upright boots, are found on the reefs or close by.

Sponges are one of the ocean’s most successful life forms. More than 5,000 species are found around the planet, with about 300 in B.C. (The province’s waters also harbour major concentrations of coral and forests of sea pens.) Some sponges are made of silica, some of calcium. The phylum’s golden age appears to have been the Jurassic period, 150 to 200 million years ago, when hexactinellid glass sponges built the largest biotic structure ever formed on Earth, a 7,000-kilometre-long reef that stretched from what is now Europe to the east coast of North America—more than three times as long as Australia’s coral Great Barrier Reef.

Coral reefs provide vital habitat for thousands of marine species, and scientists suspect that sponge reefs may do the same. We know so little about the ocean floor, and yet we’re only too ready to tear it to pieces for a few food fish or else drill and blast it in our desperate search for oil. Only 15 years ago, before we’d developed our new high-tech underwater “eyes”, we had no idea these reefs even existed. We still know nothing about their ecological significance. Permanent protection for B.C.’s unique sponge reefs seems a no-brainer. They have already been nominated for UNESCO World Heritage status.

All trawl fishing on or near the reefs must be banned immediately. And how can we even consider exploring for oil and gas in this mysterious realm, where astonishing discoveries of global importance are only now, in the 21st century, beginning to emerge?