Woodfibre LNG Project, a fracked gas terminal in the UNESCO Biosphere Reserve of Átl’ka7tsem/Howe Sound, will not only increase fracking and climate pollution in the area around Squamish and across BC, but now threatens to expose some marine mammals to dangerous amounts of underwater noise.

In the initial conditions for the project, the company was required to stop activities that created more than 160 decibels of underwater noise when marine mammals were within a 7,332 m area. 160 decibels is as loud as a fighter jet taking off near you. 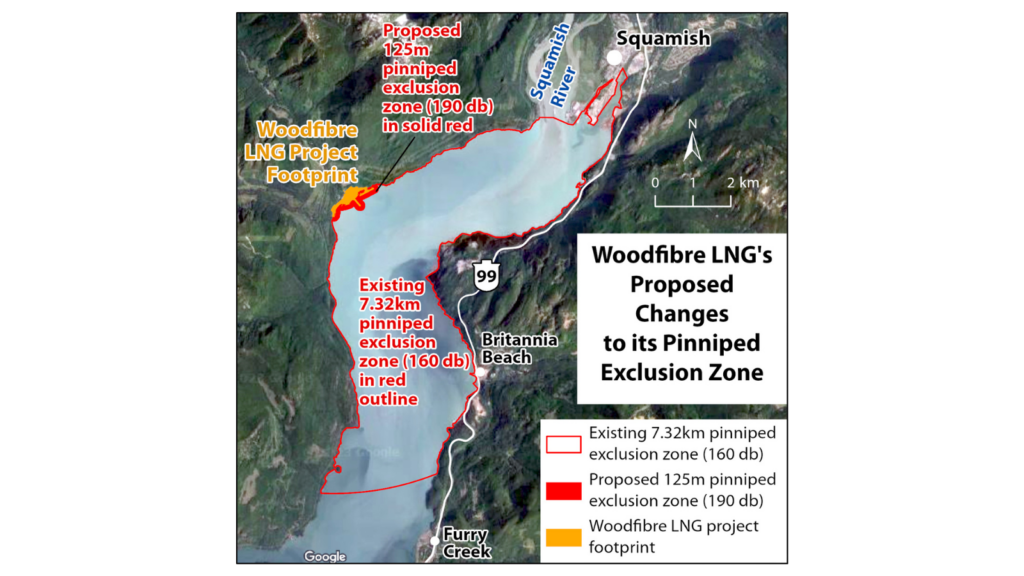 Map courtesy of the Wilderness Committee

Now, the company is asking to change that exclusion area from 7,332 m to only 125 m for pinnipeds (seals & sea lions), a move that would make this project cheaper and easier to build. At this distance, underwater noise would reach at least 190 decibels, which is louder than a rocket being launched – and much louder than recommended for human exposure!

Steller Sea Lions, who frequent the waters of Howe Sound year-round, are currently listed as a species of special concern under the Federal Species at Risk Act (SARA). The federal government has the responsibility to protect this species and their habitat.

Woodfibre LNG is looking for relief from conditions that protect at-risk species and the lands and waters we all depend on. If the Federal Government lets them get their way, they will send a clear message that fossil fuel profits are more important than the ecosystems and communities of Howe Sound.

It’s not too late, though!

You can stop this by helping us say NO to these changes and demand that protecting the environment comes before fracking profits!

Write a letter to the Minister of Environment and Climate Change Canada today!