Vancouver’s waterfront is the place where land, city, water and people have come together for thousands of years. It’s the place we are all drawn to—to play on the water and beaches, to live near the shore, to work, to travel around, to protect and connect with nature and history.

Why the Waterfront Needs Our Attention 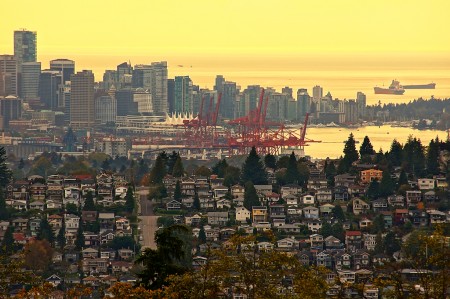 Our waterfront is under increasing pressure from urbanization, pollution, population and industrial growth as well as the effects of climate change. Parts of the shoreline—especially along the Fraser River—are changing rapidly as property values soar. And all along the waterfront, we are seeing the impact of habitat loss, fuel and untreated sewage entering the water, polluted stormwater run-off, and discharge of toxic chemicals.

As a result, conflicts are increasing between different uses of the waterfront: businesses whose work depends on access to the water, residential development, public access, space for recreation and protection of the environment and cultural history.

A Great Opportunity for a Blue City 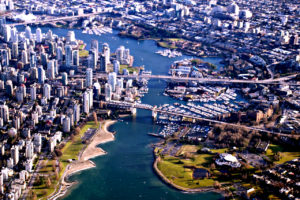 Building a waterfront for all is not solely about challenges. It presents a great opportunity. The waterfront wraps around almost the entire city, from Burrard Inlet to English Bay and along the Fraser River. As a natural connector, the shoreline has the potential to become a strong link for our community, economy and urban ecosystems.

Working together as a community toward innovative solutions can lead to a return to a healthier, more sustainable place to live and work. It can help us re-define Vancouver’s relationship to the ocean and river, as a prospering and sustainable “blue” city. 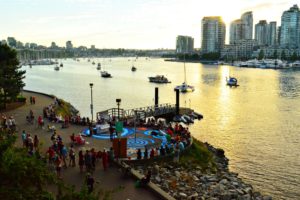 The shores of Burrard Inlet and the Fraser River have been home to people for thousands of years. For the Musqueam, Squamish and Tsleil-Waututh Nations on whose traditional, unceded territories Vancouver was built, the waterfront continues to be of great social, economic and cultural significance. 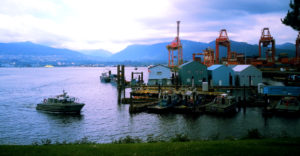 The waters and shores of Burrard Inlet, English Bay and the Fraser River have provided livelihoods and work opportunities for people since the beginnings of human settlement in the area. For those living here—First Nations and immigrants—the waterfront has always been a place to travel from place to place and to move goods around.

Using our urban shorelines for sustainable transportation and industries is important for a diverse, vibrant economy and for managing our community’s environmental footprint. Transportation by boat is many times more fuel-efficient than transportation on the road. And if industries stay on the waterfront, there is less need to get people to their jobs outside of the city and truck goods back in. The waterfront also offers many opportunities for jobs in “lighter” industries, including tourism and hospitality. 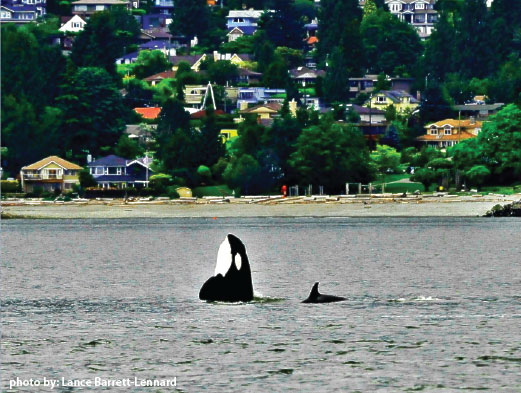 Ocean and river ecosystems are an important part of the natural environment in Vancouver—and a critical part of the health of Georgia Strait. Few large cities harbour such a diversity of habitats and species, including salmon, seals, bald eagles, and even the occasional visiting whale. Their well-being and survival depends on how we manage the relationship between our city and the ocean. Yet, we have very little hard data on the health of marine and river ecosystems in our city.