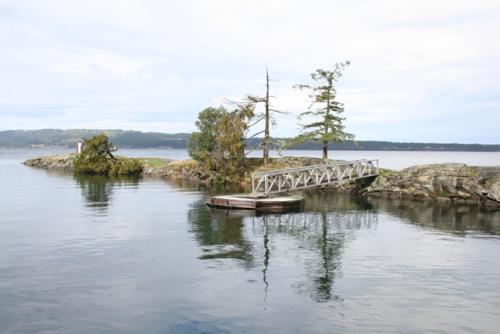 This marine park on DeCourcy Island, is where on summer weekends dozens of boats can be found anchored. Four kilometers of walking trails lead through the forest and along the shoreline, and a lovely pebble beach on the south side has a view to Ruxton Island to the south. Two reefs, submerged at high water, flank the entrance, so boaters must pay close attention to their charts. DeCourcy Island is known for its unusual history; in 1928, the infamous con man and occultist “Brother XII” established an armed colony on the island, supposedly amassing a fortune in gold coins. When conditions deteriorated so much that his followers revolted, Brother XII destroyed the colony and escaped with his mistress. Though many have searched, no gold has ever been found here.

What are Marine Protected Areas and how do they work? 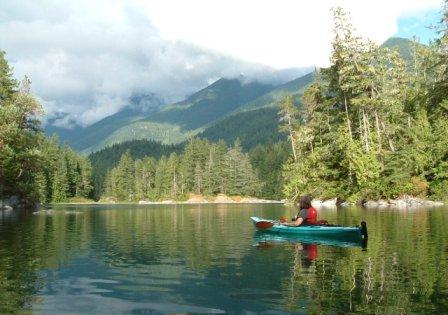 Now we find ourselves within the Desolation Sound Marine Park, on the BC mainland coast, northeast of Malaspina Peninsula. The name Prideaux Haven refers to a maze of interconnecting coves with many arms and passageways – at high tide, a delight for exploring by kayak or dinghy. Prideaux Haven is surrounded by many small islands, providing very sheltered anchorage areas, with Melanie Cove and Laura Cove being the most popular. This photo was taken in one of the coves that can be found between these two anchorages. If you visit any of the anchorages in Desolation Sound by boat, be sure to use your holding tank as these are no-discharge zones.

Where are pumpout services around the Strait? 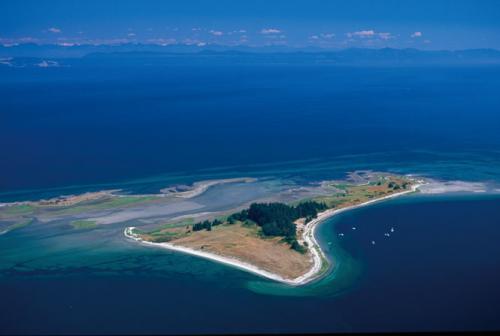 Let’s travel next to this tropical-looking marine park, just north of Denman Island. It’s part of a sandy shoal extending all the way from Denman Island to Comox on Vancouver Island: at low tide you can sometimes see as much as four miles of white sand. Known locally as Tree Island, Sandy Island contains a variety of habitats including forest, grassy dunes, salt marsh and tidal flats. The 82-acre Marine Park includes the Seal Islets to the north, and at very low tides, you can walk to them. The park is a beachcomber’s paradise! 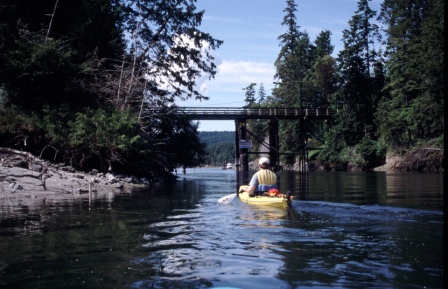 Ah, Pender Canal: the narrow, shallow channel that separates North and South Pender Islands, near the southern extremity of the Gulf Islands chain. The Canal has a low bridge over it, with eight metres clearance at high tide. This means that while kayaks and most powerboats can pass through the Canal, many sailboats cannot, because of their tall masts. North and South Pender were once a single island. The channel was dug in 1903 to make it easier for people travelling by boat. Before then, they had to drag their heavy row boats across several hundred metres of sand to get from one side of the Islands to the other, or row all the way around – a very long way to row! 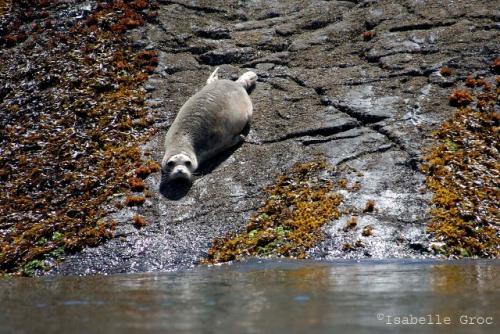 Now we’re off to Mitlenatch Island, a provincial park and the largest bird sanctuary in the Strait of Georgia. Because it is in the middle of the Strait, nesting birds are well protected from predators. It lies in the rain shadow of Vancouver Island, so has a dry climate (only half the rainfall of nearby Campbell River) so you’ll find prickly pear cactus among the wildflowers on the island’s rocky outcrops. Harbour seals are abundant year-round, and Stellar and California sea lions stay briefly during their spring migrations. About 3000 pairs of glaucous-winged gulls nest here along with cormorants, pigeon guillemots, harlequin ducks, rhinoceros auklets, oystercatchers and other birds. Two temporary anchorages are available in good weather. Leave your pets onboard (they are not permitted ashore); stick to designated paths and use observation blinds while you’re ashore, to avoid disturbing birds. During the summer months, volunteer wardens live in a rustic cabin on the island.

Did you know there are 84 designated Important Bird Areas in BC? 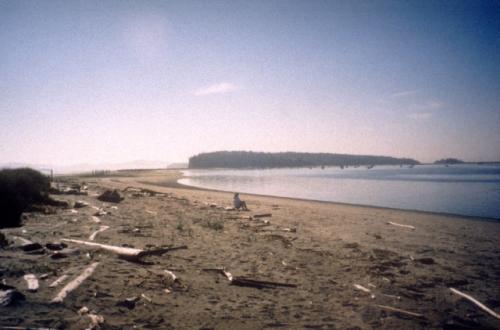 Summer on this spit at the southern end of the Strait on Sidney Island is amazing!  What better place to while away an afternoon, swimming, sunbathing or beachcombing! This long finger of fine sand and gravel was formed by receding glaciers and is constantly being reshaped by wind and tide. Sidney Spit Marine Park includes the Spit itself, a saltwater lagoon and 140 hectares of forested land and shoreline. The lagoon is an important feeding ground for marine birds, so off-limits for motorized vessels, but trails around it provide for good bird-watching. Mooring buoys and campsites are available. If you don’t have a boat, you can get to Sidney Spit by passenger ferry from nearby Sidney. 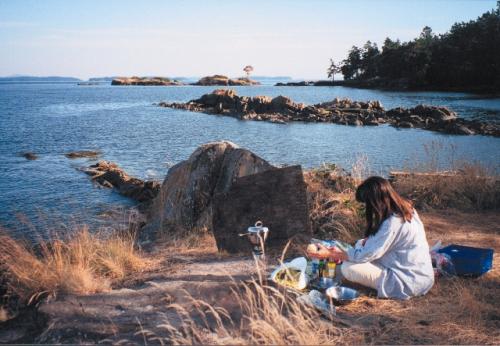 Moving from the Spit, we next visit Princess Margaret Marine Park, near Sidney on Vancouver Island. This 534-hectare park is accessible by boat or kayak, with several anchorages and camping areas with fresh water and toilets. The Park is a great place to stretch boat-weary legs, as an extensive trail system circles and crosses the island. Extensive middens around the shorelines show evidence of early habitation by Coast Salish tribes. The Province gifted the island to Princess Margaret when she visited BC in 1958; she later returned it and in 1967 it became a park. Brackman Island, just off Portland Island’s southwest shore, is an ecological reserve and closed to public access. 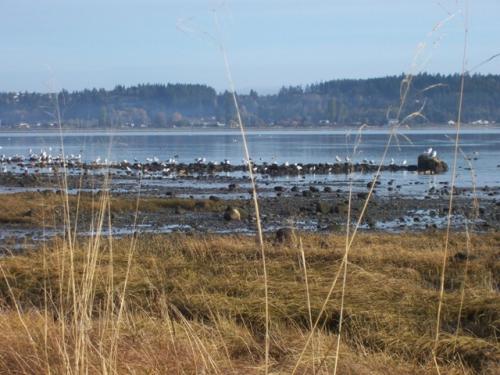 Now we head to the spot on Vancouver Island where the Courtenay River flows into the Strait of Georgia. Estuaries (where salt water mixes with fresh) are, biologically, among the richest ecosystems on earth, and they are critical to the survival of a great many animals. The beautiful Courtenay River Estuary is a wonderful place for bird-watching – as well as the year-round residents such as Great Blue Herons and Bald Eagles, you’ll find many species of wintering waterfowl and migrating shorebirds. In fact, this is the single most important wintering site, globally, for Trumpeter Swans – 10% of the world’s population of these protected birds winters here! As well, the Courtenay River Estuary is extremely important for the survival of local wild salmon runs. But like many estuaries around the world, it is under pressure from pollution and urban development.

Did you know that although estuaries make up less than 3% of BC’s coastline, 80% of our wildlife depend on estuaries for survival? 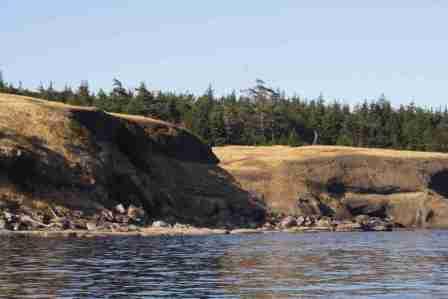 Next we visit lovely Hornby Island. Helliwell Park’s three-mile trail winds along the top of the cliffs and offers a spectacular view of the Strait. The bluffs are a fragile ecosystem, so stay on the trail and avoid areas that may be roped off for revegetation. Pelagic cormorants nest on the cliffs and many other seabirds are visible, especially from November through March when herring are spawning. Sea lions often haul out on nearby Flora Islet, which is part of the Park. Flora Islet is one of the few places in the world where scuba divers can often see six-gill sharks, which can be over 4 metres long. Normally a deep-sea creature, the six-gill inhabits Flora’s shallower depths from April to September, and a spotting can provide quite the thrill! 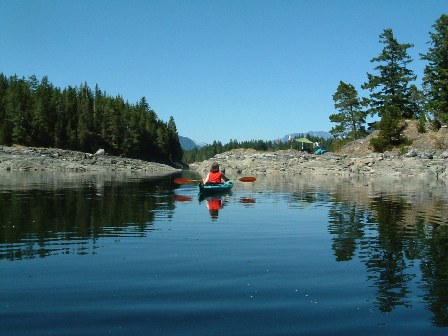 The last stop on our tour is a complex of islets and shallow bays on the east side of Quadra Island. The Park is a calm spot at the confluence of three turbulent tidal passes (Surge Narrows, Okisollo Rapids and Hole-in-the-Wall), so boaters anchor here while awaiting slack tide when they can safely transit these passes. Bodega Anchorage and Waiatt Bay provide good anchorage areas, with numerous small islets and reefs making for great kayaking or dinghy exploration. From the head of Waiatt Bay, you can walk across a short trail to Small Inlet, on Quadra’s west side. There is also a steep trail (much more arduous!) leading to Newton Lake if you’d like a freshwater swim.

Thanks for visiting with us!